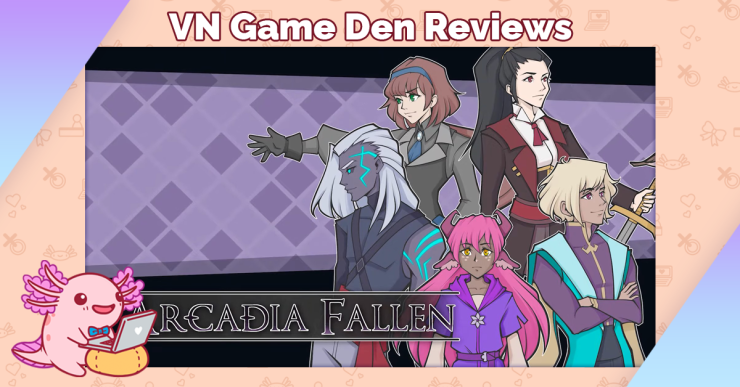 After being inadvertently (and illegally) attached to a spirit, you find yourself in the middle of a war between human and magic. Join together with a ragtag group of heroes to escape your own troubles and maybe save humanity along the way.

From Galdra Studios, Arcadia Fallen sets you in the shoes of a young alchemist at the edge of a life- and possibly world-changing adventure. After being inadvertently (and illegally) attached to a spirit, you find yourself in the middle of a war between humans and magic. Join together with a ragtag group of heroes to escape your own troubles and maybe save humanity along the way.

An advance game key was provided by the developer.

The art is fantastic both in style and form. There’s definitely a few different influences apparent, but they all synthesize together well into something unique and charming. While I think it could do a little more with its visual action sometimes, it’s still got a lot going on. It’s got an incredible opening sequence. It’s a got a large cast that’s fairly visually expressive. It has a number of interesting set pieces. The mini-game segments are fairly simple but look great. And it has a very nice overall aesthetic feel. It is a great-looking game.

It gets harder from there, though, because underneath that appearance, it becomes more of a mixed bag with some very subjective pros and cons.

I really love the approach of a sort of open-world visual novel. I think the character creation ability is great, and I can definitely see the places where you’re intended to be given a lot of control over the story. I’m just not totally convinced of the efficacy of the implementation to really achieve that goal. It gives you a lot of choices, which a lot of people really enjoy. The big choices that affect the story are called out to you in a very dramatic way. With the number of choices you make over the course of the game, I can see the necessity for that, but it can feel a little hand-holdy. It makes me wonder if there was a more diegetic way to do it. One of the unintended consequences, I think, is a little bit of weird choice balance. There’s one you make very early that changes all your dialogue options from there on out, and it just feels a little weird. Because in that moment, it doesn’t really change what you do, just how you react to it. In and of itself it’s not that big of a deal, but combined with how many tonal dialogue options you get, I would have anticipated something a little more subtle and compounded. And you do get a lot of tonal dialogue choices, almost to the point of choice fatigue. I wanted to start seeing my character’s personality unfold on its own after the choices I had made for them, I just didn’t feel like I saw that.

I think the issues I see in the construction of the interactivity are more apparent to me because I didn’t find the story itself to be very strong. It’s not bad writing, by any means. The world-building is generally good. It’s subtle and organic. I find the characters approachable. Apart from a few weird grammar-structure choice, the writing at textual level is perfectly fine. It’s an enjoyable read. I just think a lot of the characterization relied very heavily on the voice performances, which were all incredible. It’s a fantastic cast. But since it’s only partially voiced, there’s a small gap between what the cast could carry and what the text met them with.

And while, again, nothing is done poorly, nothing just really stood out to me, narratively. It’s just fine. The world and magic systems are pretty bog-standard. I just didn’t really myself walking away with a very strong attachment to the characters, the setting, or the story.

One of the more unfortunate things is that everything is so well-produced that the little flaws really stand out. There’s definitely some imperfections in the audio mixing of the voice, for example. As someone who has experience in that field, it’s certainly subtle and others might not notice. It has this really great opening sequence, though, and you can’t understand the lyrics of the original song the way it’s been produced. There are also a few minor things missing from the base functionality that one expects from a visual novel. There’s no way to control auto-forward speed. There’s no rollback. There’s no text history. While they’re very small elements of visual novel functionality, they’re also fairly standard, so not having them is noticeable. Overall, it creates a feeling that they favored form over function. I also wonder if the fact that it is so well-produced set an expectation it couldn’t meet in all areas, that something less well-produced might have. For me, I’m left with this very overwhelming feel of “it’s not bad, but I can point out specific things I would have liked more.”

Arcadia Fallen is a passable adventure visual novel with some of the narrative elements of RPGs. It’s the perfect game for anyone who really likes the openness and the feeling of exploration, but may bog down players who prefer something a little more narratively sleek. Overall, though, it’s a generally fun experience.

Get it on Steam.