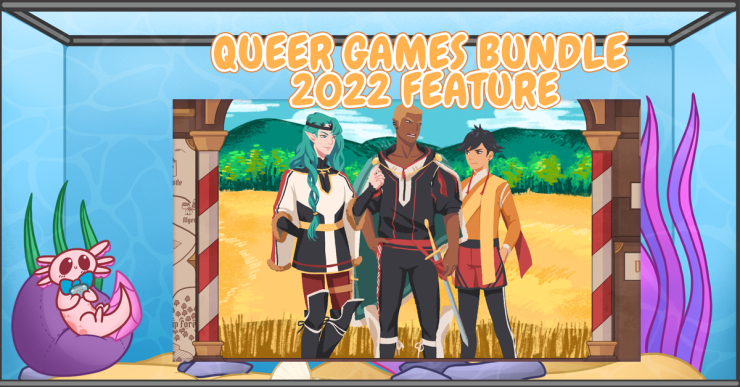 These are some of the visual novels you can find in the Queer Games Bundle 2022 on itch.io!

Right now there is a bundle on itch.io, the Queer Games Bundle 2022, featuring nearly 600 amazing games and other items for the price of US $60. The funds go toward supporting queer developers, and there are loads of visual novels packed into this bundle! Today we’ll take a look at a few of the games that help make this bundle so special. And don’t worry, if $60 is out of your budget, there’s a $10 version of the Queer Games Bundle as well!

Alec has two choices before him. Ignore the stranger’s attempts to converse (he could be a serial killer, after all) and wait for the bus, or engage him (what else is there to do stranded at a bus stop) and see what happens.

The Morning Star is an atmospheric visual novel about the encounter between two strangers at a bus stop. Alec, the protagonist, has no memory of the events that led him there, which puts him in a tricky situation. The game has three different endings, so it’s up to the player to decide how the story ends.

What I love the most about this game is how it plays with color and light to give focus to the scenes. The art is beautiful and eerie at the same time, which really sets the atmosphere and matches nicely with the writing and ambience.

A lonely witch finally completes her prized creation after years of mischievous preparation… and it’s cuter than she ever imagined! Follow her, her homunculus, and a forgotten friend in this informative course about emotions and magic.

Making Friends is a magical girl visual novel starring a cute goth witch and her homunculus friend. This is a girl x girl visual novel that branches into multiple endings, all of which teach you something new about your emotions.

The most unique aspect about this visual novel that you don’t choose conventional choices or actions to affect the story. Instead, the player responds to events by choosing an emotion to react with, which is a pretty therapeutic approach to visual novel gaming that I like.

In Boiling Over, you play as Hazel, a part-time college student who is saving up for a study abroad program by working as a barista! As a barista, it is your job to craft delicious beverages for all of the lovely customers who walk into the store. However, some customers are anything but lovely. Some are jerks. Even worse, some are jerks AND are transphobic. Gross!

Boiling Over is game about making coffee and navigating the social circumstances that people in the trans community face. This game is a blend of visual novel storytelling with coffee-making minigames.

Players can choose how to respond to customers who behave rudely to the protagonist, Hazel. The story covers real-life issues which are important for us to reflect on. However, the sensitive content can be toggled off, allowing players to just enjoy the fun minigames and slice-of-life aspect if they wish!

Three princes are sent on a dangerous journey in order to marry the princess of a neighboring kingdom. But is this really how it is going to end?
What about the princess, doesn’t she have a say in this matter?

Watch the story of these royals unfold and change its outcome.
Because for every political marriage, there might very well be a (gay) alternative…

Brassica – A Marry Tale is a spin on a medieval arranged marriage between a prince and a princess; instead, a different romance will unfold. This game is released in acts, with acts one and two currently available to play.

First of all, I have to mention how clever and adorable the title of this game is. With a fantastic title, stunning artwork, and overall a refreshing twist on the classic fairy tale narrative, I adore everything about A Marry Tale. I recommend this game to anyone who loves historical fantasy and is on the hunt for a new BL story.

All Eve ever wanted was to protect and preserve the land, but after five years of being a ranger in Yosemite National Park, she’s just about ready to throw in the towel. However, things start to change when she meets three spritely girls who claim to represent the National Parks.

National Park Girls is an episodic visual novel that follows a park ranger and her encounters with the personified versions of Zion, Yellowstone, and Yosemite National Parks. This kinetic novel is a supernatural take on America’s national parks, as represented by cute girls.

The story and setting are a nostalgic road trip reminiscent of Highway Blossoms with cute girls and American scenery, and I’m all for it. What I love about National Park Girls is not only the unique plot, but the backdrop of nature based on real-life national parks.

Everyone in The Brightlands has the same wolf’s wool covering them, protecting them, and keeping them acceptably happy under the gaze of the eternal sun. So why does the wool feel so heavy? And what happens when it starts to fall apart?

Wolf’s Wool is a unique visual novel experience that features abstract art and a thought-provoking narrative. The game brushes upon themes of existential crisis and body discomfort and is told through abstract illustrations and a story-rich narrative.

Props to this developer for creating this beautiful story for others, whether they can relate to the characters or they’re looking to gain a better understanding of what life is like for people who are faced with uncomfortable expectations.

Your name is Adrian Clarke and you’ve been given the opportunity to live the rest of your life on a distant planet under the watchful eyes of benevolent robots. Help shape society on T-3R4, build relationships with the other settlers, and keep Earth updated through your blog!

Ace in Space is an asexual romance game with a nonbinary protagonist and robot characters. This game also has point-and-click elements and offers a total of five different love interests.

The story for Ace in Space is impressive and unparalleled with a creative concept. Ace in Space has a ton of stellar artwork; I’m especially a fan of Fern’s character in particular. Overall, I think it’s wonderful to see a game with ace representation like this, and I think this game is a gem that needs to be discovered by more people.

There are plenty more games in this bundle, including both visual novels and other genres. You can purchase the original bundle here, or show your support with the pay what you can edition. Since this article is about supporting these queer developers and artists, I want to remind you that you can also support these creators by rating their games in addition to purchasing the bundle—more ratings help increase a game’s visibility to potential players!