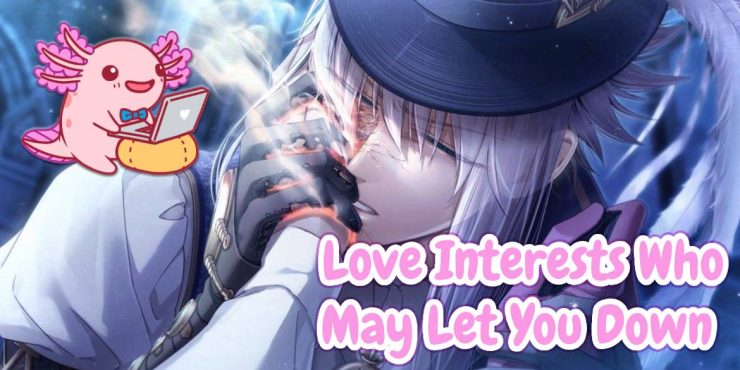 Love Interests Who May Let You Down

Take a look at some of these questionable romance routes that left us wondering if we were really playing a romance game!

Imagine spending hours of your life on a game only to find yourself stuck not being able to progress through a game’s main story because the romantic path you’re on is, well… not really romantic at all!

Sometimes a game’s story is written extremely well. It has beautiful art, a tantalizing premise, and a great dynamic soundtrack, and yet… there’s that one route that makes you raise a brow and ask yourself, am I even playing the same game right now?

If you’re knee deep into a route and you’re asking yourself why you’re still trying to romance this questionable man, then this article is for you. And if you aren’t? Let this be a warning that things are not always rose petals and flower blossoms in these love stories!

Please be mindful that the examples I’m using in this article will contain spoilers! 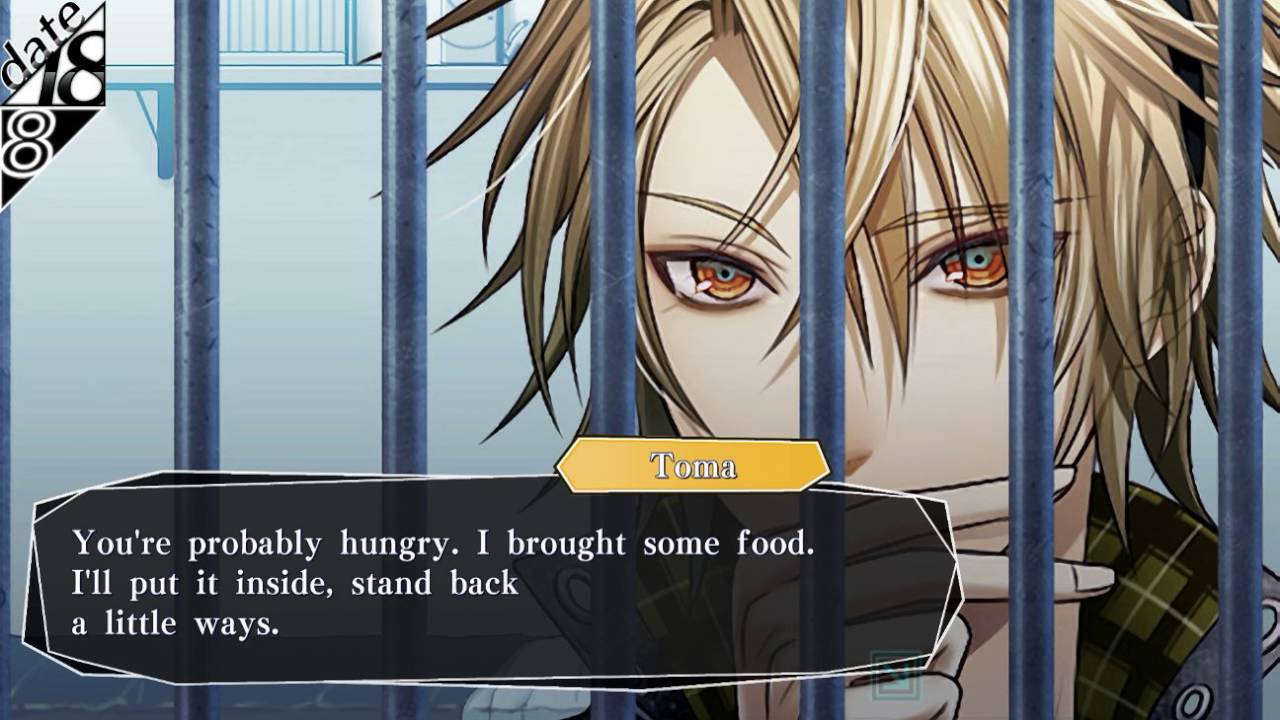 Anyone who has played otome games, especially higher-budget otome games, for a long time knows about THE CAGE. So many memes are made about this particular route because it’s controversial, shocking, and even downright unappealing (to many). Before I dive even further into this hectic route, I do want to point out that Amnesia: Memories is a great game with an interesting way of telling the story through the voice of a spirit that guides the MC, Orion. There is a lot to love about this game, with an anime that compliments it quite nicely.

However, in any version of the work, Toma’s intentions and actions stay the same. His design is actually quite nice. He has the nice-boy-next-door look and I was drawn to his character almost immediately. But I was not prepared for what would ensue once I pressed play.

Toma essentially puts drugs in the MC’s food so that she’ll sleep more and avoid leaving his home, which he has invited her to stay at under the guise of protection. Toma goes even further to lock her in a dog cage and handcuff her so she doesn’t escape. The worst part about all of this is the MC’s constant attempts at justifying this behavior, going so far as to claim she’s going to wait for him once he gets out of jail.

Toma’s route is not for the faint of heart. Tread with caution.

I write a lot about Code: Realize because it’s one of my favorite otome games of all time. The game has beautiful art, steampunk designs, a nod to some historical figures, and one of the most unique premises I’ve encountered in a long time.

However, the game’s biggest downfall in my eyes is locking Lupin’s route until you’ve completed every other love interest’s. Sure, it gave me the opportunity to learn more about the story and the characters, but it was also a pain because of Saint-Germain.

The seemingly nice guy who holds the new family of misfits together is not who he appears to be. He has similar tendencies to Toma above, except on a grander scale. He begins to treat Cardia with disdain as he gets closer to her. It’s like he’s a completely different person. Sure, there’s a reason for it, but not one I can justify.

By the end of this man’s route, I was almost ready to give up, and I asked myself if Lupin was really worth it in the end. While Saint-Germain has some intriguing lore, he will not be Cardia’s knight in shining armor like some of the other guys. 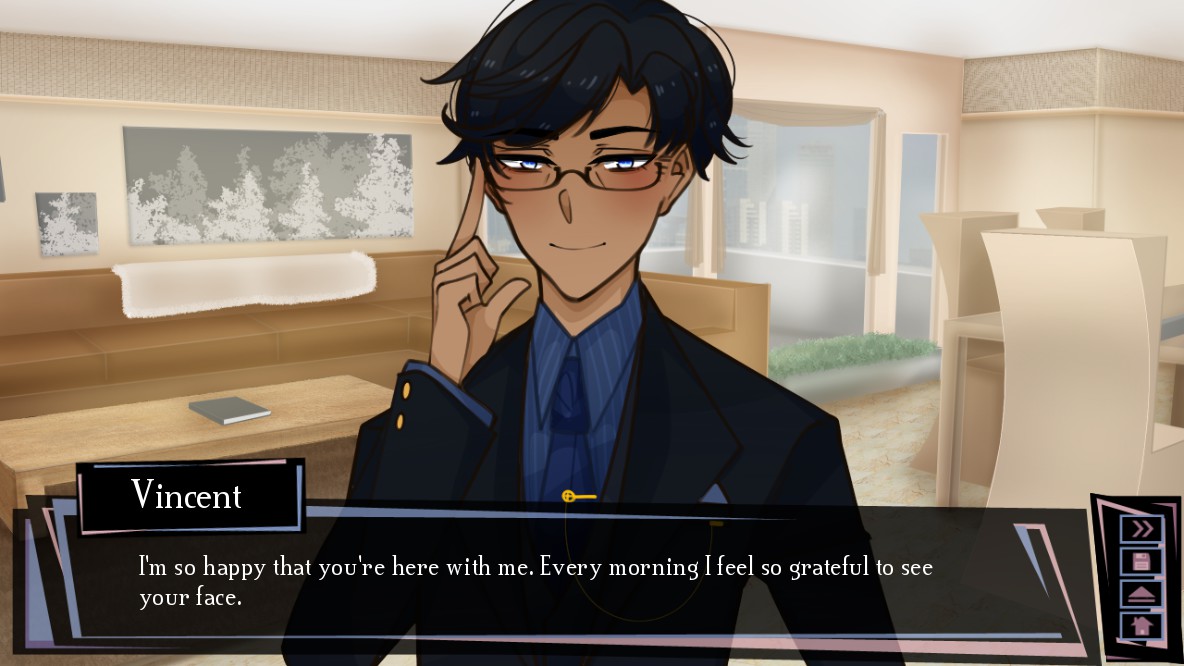 It’s not only high-budget games that are plagued by these misleading characters. Indie games can sometimes give us the same dread in the pit of our stomachs. Dead Wishes has a lot of routes—twelve, to be exact—and you must complete all of them to unlock the true ending. It’s a daunting task, especially considering most of the routes are horrifying.

Before I go any further, I want to let you all know that Dead Wishes is a psychological horror game. It’s meant to be full of dark themes and characters who do bad things. The developer does not hide this fact. Most of the routes I’ve played through are incredibly written and will keep you at the edge of your seat; however… even in the “good” endings, things aren’t very sweet. Something still feels amiss, and that’s the game’s intention.

One character, however, sticks out the most in this game. The charming banker Vincent. He has a smooth voice that beckons you to him. It’s hard not to want to get swept up in his “good guy to marry” persona. However, after a very unfortunate moment that you are powerless to stop, the MC finds themself trapped in Vincent’s house and forced to be his wife. But, in a twisted and deluded way, the MC isn’t treated like a woman Vincent loves, and things only go down from there. Speaking about it won’t do this route justice. You need to play it yourself, but I’m warning you that it’s a lot darker than you think.

Even games you love can have characters that will let you down, and not in a gentle and easy way. Let us know what you think in the comments below!