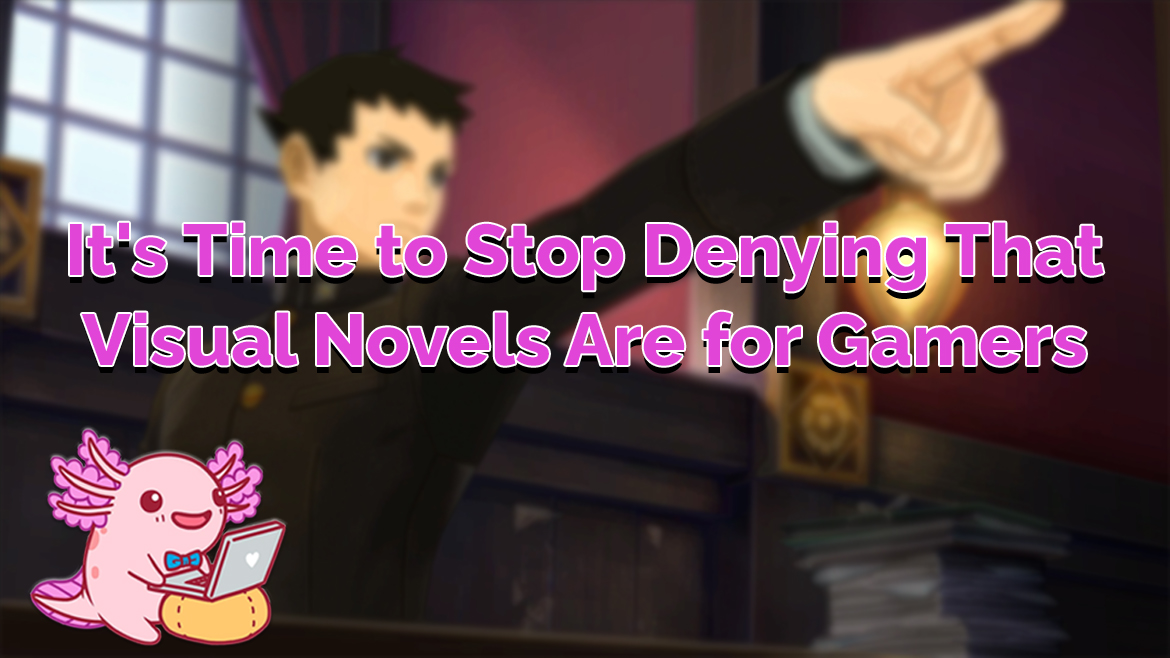 A pernicious argument about visual novels, and their audiences, is that they aren’t “games” nor are the players “gamers,” specifically when compared to other games. But that argument is not only wrong, it’s harmful to the growth and perception of visual novels as a whole. And it’s time that visual novel devs and fans themselves stop buying into the argument and claim their rightful title as “gamers”!

While the answer to that should be simple—a person who plays games — the “identity” of a capital-G Gamer is a fairly odd and contentious title. Who is or isn’t a “real” Gamer is something that spawns endless tiresome debates at best, and harassment mobs at worst. But the real harm done by this constant attempt to codify “Gamer” as a specific, “hardcore” type of person harms the entire hobby and medium, particularly in who it tries to exclude and why.

It should come as no surprise then that visual novels and their audiences tend to be excluded from being “real games” for “real gamers,” due to the intricate text-based nature of VNs, but more importantly, and more blatantly, because VNs these days (especially with the rise in numbers of Western indie VNs) tend to cater to non-male audiences.

But even within the sub-community of VNs, it is rare to see devs and fans refer to themselves as Gamers, as if the title never occurred to them, or they didn’t feel like it was a word they should be using.

It’s time for that to change: Visual novels are games, and people who play them are Gamers.

What’s in a Word?

While this may seem like a fairly unimportant distinction, communities define and set their own boundaries by the words and rules they set for themselves, whether consciously or unconsciously. This means that in the realm of video games, a constant tension is the idea that the community, and thus the quality of games, is somehow tied to who is considered a gamer or not. Common complaints in comment sections and streams are about how “casual” gamers are ruining games, or that “pandering” to wider audiences is somehow diluting the community and making games worse overall.

All of this is functionally bullshit, of course, but that doesn’t stop the few noisy folks within the community from arguing and finding ways to try and exclude people from the community. Perhaps, even, people don’t want to call themselves Gamers because of it; after all, if the term renders up an unpleasant image or the idea of harassment and exclusion, it likely wouldn’t be attractive to call yourself that term. But the issue is that this makes “Gamer” something of a misnomer—it ascribes a very particular and small subset of the medium to describe the overall hobby, and then attach other terms in front of it to exclude or specifically categorize people into less important, or adjacent, categories: “visual novel gamer,” “casual gamer,” “dating sim gamer,” etc.; they try to put specific genres in front of the word in order to distance them from the center.

This, however, just creates the illusion that there is some actual “default” Gamer at the center of the circle, and that other genres and subsections in the hobby are on the rim or outside of that circle. This fractious identity only damages the hobby, but it also hurts development and marketing of games too, as it ascribes a specific mindset to who plays “real” games and who plays “other” games; a quick glance at the way huge events like E3, GDC, or other game reveal conventions makes it easy to see that the market, devs, and even the media itself, despite often arguing that “gaming is for everyone,” routinely, or “accidentally,” forget that when targeting specific demographics with their output. While this article doesn’t expect to change an industry, we can at least start to change our own perspectives.

While it may not be something developers and marketing do on purpose, the way visual novels are approached in terms of attracting players is generally unhelpful. Since the idea that VN players are not “gamers” is fairly commonplace, it also means that companies routinely make weird, odd choices when marketing said games. In some cases, this even leads to a sense of self-deprecation, as if VN players are aware of their “non-gamer” status and seem okay with being talked down to as if they are a weird subgroup, removed from the general population of the gaming public for their enjoyment of VNs. But the bigger issue is that it assumes that VN players only play visual novels, and don’t partake of any other games in any way.

This, frankly, is the biggest oversight that some devs make. Their marketing focuses solely on VN players as an already existing market, rather than doing that AND trying to attract or consider wider markets. It also means that VN fans are generally immune to or even tired of the usual selling tactics to attract their attention to a game, leading to cringe-inducing memes or other bland techniques to try and make a game attractive, rather than discussing the merits of the game itself.

The idea that VNs, being story- and text-driven, are “too reading-focused” neglects the fact that many games that are intensely popular in the current market feature as much, if not even more, reading and text than most VNs do. Games like Mass Effect, Yakuza, later Final Fantasy games, and the like have monstrous scripts that, while partially voice acted, far outweigh the average length of most individual VNs. It also destroys the idea that “Gamers” don’t like games with involved, detailed plots.

Of course, the issue may seem to be that things work fine the way they are now, so why bother trying to market beyond current audiences, or worry about attracting new players? But, as touched on in some previous articles, VNs need to look beyond their current audience and games for new ideas, new members, and new ways to tell stories. Simply retreading the same types of titles and games over and over does not help the genre, but neglecting to claim ownership of the “Gamer” name also doesn’t help, reducing VNs to something niche or “weird”, which in turn lets companies make fun of VNs through things like the KFC “dating sim.” By allowing VNs to be pigeonholed as something weird and “not a game,” the genre suffers overall by letting others in the gaming community use the genre as a joke and devalue it overall. The number of times companies have made joke VNs, or teased them as April Fools’ jokes, is proof enough that the idea that VNs aren’t “real” games for “real” Gamers is sadly already fairly common.

But the community also does not seem to particularly try combating this, which is the call to action needed to help prevent VNs from being pushed into even more of a niche than they already are. Yes, VNs are not “like other games,” but that is their strength, not their weakness. Fighting games, sports games, RPGs, etc., aren’t viewed in such a dismissive manner, and in part that is because their communities (both devs and players) actively fight to have their games perceived as “games”; VNs, however, tend to either choose not to fight this, or somehow view this from a slightly different angle: that they’re too good to be “games” for “Gamers”, so why bother attracting them anyway? Perhaps, then, it is time for VN devs and fans to become their own biggest fans and start saying that they are, indeed, Gamers, and their games are just as valid and worthy of being part of the larger community as any other game on the market. But also, next time your friends ask you what types of games you play, be sure that you mention VNs in there!