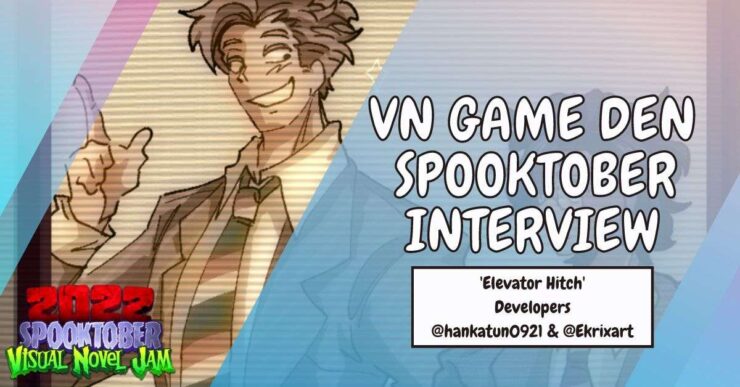 Today we sat down with Ekrix and Rachel, the duo behind Elevator Hitch!

RachelDrawsThis and Ekrix are two game developers and friends who are the creative minds behind Elevator Hitch. While Elevator Hitch wasn’t Rachel’s first title, it was Ekrix’s! The game ended up winning second place for Spooktober Jam 2022. So, we decided to sit down with both Rachel and Ekrix to learn more about them, what it was like to make Elevator Hitch, and more!

Note: This interview contains spoilers for Elevator Hitch. If you haven’t played the game yet, you can download and play it for free on itch.io!

Hi there! Can you two tell our readers a bit about yourselves and how you got involved in Spooktober?

Rachel: Hello, Rachel here! I’m the developer of Elevator Hitch along with Rix, it’s an honor to be in the interview. Thank you so much for having us!

I stumbled upon Spooktober Jam purely by coincidence while I was looking through the itch.io page for a good game to play/watch a playthrough of while hanging out with Rix instead of the one we were already watching which I thought wasn’t what I was looking for in a horror game. At first I jokingly said “Hey, we should just make our own self-indulgent horror game” to Rix but after seeing the Spooktober Jam page, I realized that… could actually be a possibility. So we just Went Right With It! It’d only been 2 months since I developed my previous game which was also for a jam so I was initially planning to take a break from game dev-ing for a while, but something about Spooktober just dragged me right in. Guess the love for horror prevails all…

Rix: This one’s rix. I’m the co-dev of Elevator Hitch, I first got involved when Rachel asked if I wanted to help for the spooktober jam after we’d just watched a playthrough of a horror game neither of us really liked. I joined because working on a horror game was really exciting and I had nothing else going on but I’m pretty sure it was initially spite driven.

Was Elevator Hitch inspired by anything in any way? (Storywise, gameplay-wise, art, etc)

Rachel: The overall idea for the game came from my personal fear of jobs, interviews (This one is an exception, I promise!), and adulthood! As someone who only recently entered society as an adult, everything around me feels surreal and confusing at times, and I wanted to transfer that experience into a game, which came to be Elevator Hitch!

There were other external sources of inspiration of course! I’ve always been a big fan of corporation/capitalism horror (Is this a real genre? It’s a very specific vibe and I don’t know how to describe it,) media like the game Stanley Parable and American Psycho, so the general stylistic inspiration for the game came from those two.

Gameplay-wise, since the aesthetic is all about the office that’s full of retro computers and technology I thought diving into a more analog horror side of things would also be fun to throw in the mix and include a mechanic that’s meta or self-aware that recognizes the players to have that extra spookiness. And since it was going to be a pretty short game I thought having multiple endings/collectibles would keep players interested. I looked for games that incorporate these ideas well such as Don’t Push That Button, Stanley Parable (again), and Undertale.

Rix: The initial pitch had inspirations from Stanley Parable, American Psycho, and Don’t Push That Button– But we pulled a lot just from different tropes and shows we watch. “A fucked up liminal space office building death loop where reality in just slightly off” is a category that surprisingly spans a lot of different media. For background art and design inspiration I looked through a lot of office catalogs from the 70s and corporate training videos between the 60s and 80s.

Elevator Hitch was made in RPGMaker rather than a standard VN engine like Ren’Py. That’s pretty cool! Can you tell us why you went in this direction and what are some of the perks in working in this engine? Any difficulties?

Rix: Oh, I have no fucking idea, Rachel did all the coding. I’m not good with code but as far as I know RPGMaker is best used for pixel art rpgs and exploration games. I have no idea why or how she used it for EH

Rachel: The main reason was that I was already familiar with RPGMaker the most as a game engine by the time of the game jam as I already made two short games before, so naturally I went with working with this one again instead of scrambling to learn Ren’Py or other more visual-novel directed programs in the short amount of time. The engine had its ups and downs, and I was really worried during the production since our game was going to be infinitely (ha) harder to come up with a full narrative or story as most stuff needed to be vague so we don’t ruin the surreal part of it + most other people had really fancy looking UIs, good dialogue control with skip buttons and volume mixers, and CG galleries that shows all the art players can collect which are all awesome addition to visual novels and I had no idea how to implement any of them in RPGMaker. We tried our best to make up for what we were lacking by adding a hopefully more engaging gameplay segment consisting of 3D Maps and point-and-click function which is easier to add using this engine, and I guess the irony is that the engine’s lack of support on visual novel features is what helped make the game unique as a visual novel, if that makes sense?

Since your team had multiple members, can you guys talk a bit about how you divided up the work and how your development process went?

Rix: Since I can’t code it was decided early on I’d be working on the pre-production stuff- getting sketches together, working on the backgrounds, etc. We both collaborated on story and writing with me doing rough passes at dialogue and them working on everything else. Rachel cleaned up all the final art and polished everything up before coding it in.

During the whole process we’d send concept art and backgrounds for each of the floors with audio cues and music inspiration to our composer BellKalengar. He did a great job with the tone and style of each floor and made a strong main theme that he edited for the feel of each different area. He made a really well done soundtrack for the game and it really wouldn’t have been as impactful without it.

Rachel: Rix summed it up perfectly!

There are 15 endings in Elevator Hitch. How did you guys come up with all the different endings?

Rachel: “Hey, wouldn’t it be really funny if he died like this?”

While we’re on the topic, what is your guys’ favorite ending in Elevator Hitch? Personally, I loved the Help one! I was left speechless after that one, haha.

Rachel: Help ending was my favorite too! It still gets me to jump even though I was the one who coded it in, I didn’t realize I made the sound effect so loud and abrupt. It makes me really happy to know that the scare was effective enough for a lot of people who first played this game! When I saw Rix’s initial sketch for the ending I screamed at him how evil he was for this (I was grinning ear to ear). I really had fun drawing the final CGs for it too- I may have gone a little too overboard with the blood effects though, which had us worried the game was going to be disqualified for being too gory during production. (Thank you for letting us keep the ending, hosts!)

Rix: Ending 12 was really fun, the one where you stab your coworker to death.

Will users ever get to find out the name of the protagonist or is that going to remain a mystery?

Congratulations on winning one of the top prizes! What was your guys’ reaction to your win?

Rachel: MAN. I genuinely did not expect it- I still don’t believe it actually, I’m convinced I’m trapped in a surrealistic dreamscape where if I escape I’ll loop back to the first day of the jam back in September. There were a lot of fantastic entries and honestly I was already happy with just having finished something and being able to stand with everyone else’s games (which were all creative and well-made, seriously, there are so many talented people in the community!) Funnily enough, I was still at school about to get on the elevator when the announcement dropped. As soon as I heard the judges say “This entry went without a hitch” during the live awards my heart literally sank that for a brief second I thought the elevator was dropping. Can’t thank you judges and players once again for giving us the win, it’s an honor!

Rix: Visceral shock and confusion. It’s not that I didn’t think Elevator Hitch was deserving of it, I was proud as hell, It just wasn’t what I was expecting. I thought I was gonna throw up.

Following the success of Elevator Hitch, do you have any plans for future visual novel projects? Will we see your team participating in Spooktober next year maybe? 😉

Rachel: I’ve got so many new ideas for games all kicking and spinning around in my brain like a microwave- I’d absolutely love to keep being active in the visual novel-deving community and I will definitely look forward to Spooktober from now on. I still can’t believe I didn’t hear about this until this year! Thank you once again for hosting and giving us a wonderful experience/opportunity!

Rix: If I make plans ahead of 3 weeks or start thinking about the future too hard I usually start convulsing but I’d love to continue working on projects like this. Elevator Hitch was my first time working on a video game and it was incredibly engaging to work on, I’m super pumped to work on similar projects in the future, yeah!