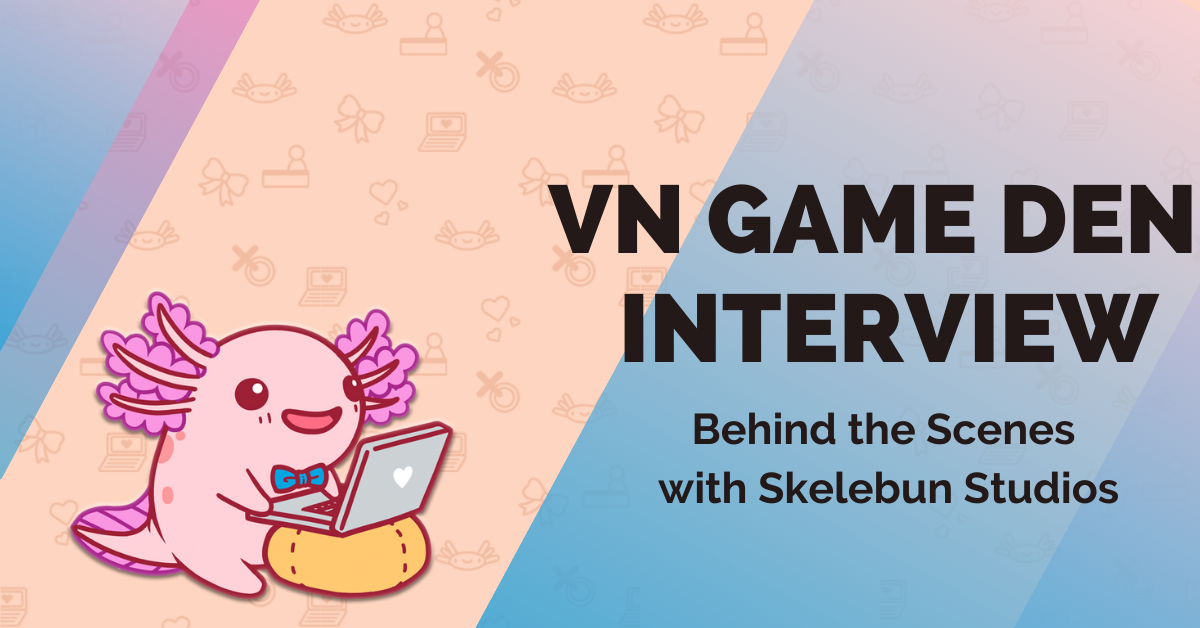 With a few games in development, and more likely coming, we decided to sit down with Skelebun Studios to talk about their journey as a visual novel developer and what players can look forward to.

Hazu is an artist, writer, and visual novel developer currently working on DreamCatcher: Reflections and Play Dead! under the studio name, Skelebun Studios. They’ve worked on a variety of genres including fantasy, adventure, comedy, and horror. Most recently Skelebun Studios has released an update to their episodic visual novel, DreamCatcher: Reflections Volume 1, that includes voice acting, sprite animations, and other improvements. You can download the first five chapters and an exclusive bonus chapter on Itch.io and Steam.

With a few games in development, and more likely coming, we decided to sit down with Skelebun Studios to talk about their journey as a visual novel developer and what players can look forward to. 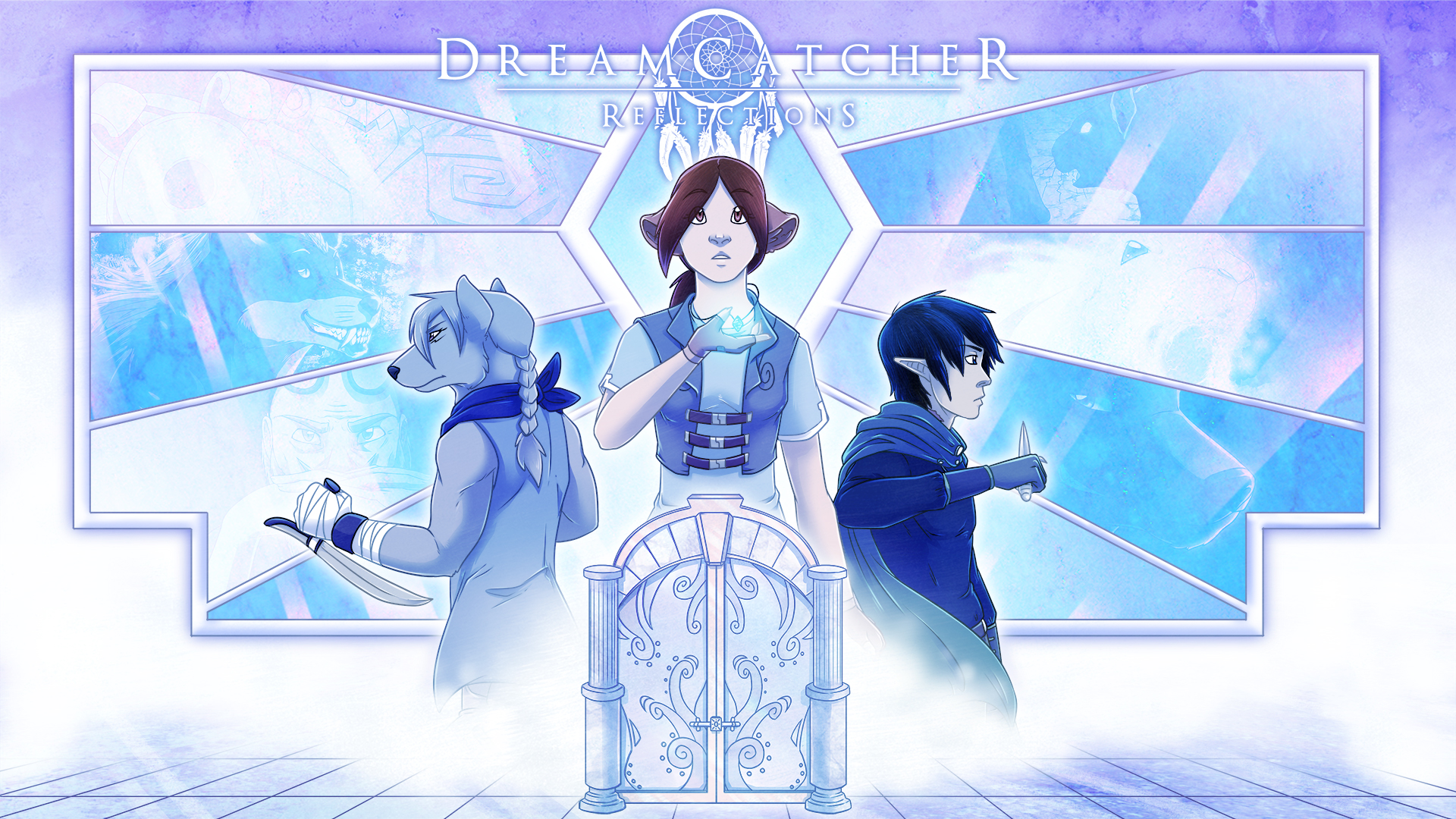 Let’s start off by talking about your development journey. How did you get into making visual novels?

Kind of by accident, actually! DreamCatcher was a webcomic for a very long time, but I eventually realized that at the pace I was putting pages out I was never going to finish the story, and for some reason the solution I arrived at was to scrap ten years of work to start it over in another format that I could get out faster. I played with a couple of different ideas, but eventually landed on visual novels because it not only put me in a position to get chapters out faster since I don’t have to draw every little thing, but I was also able to make it a lot more of a multimedia experience, which is something I’d always wanted to do. I’m pretty enamored with VNs as a storytelling medium now; there’s just so many things you can do with them and every dev does things a little different and has their own unique spin on it! (Also, if I had a dollar for every time I’ve played another indie VN and went “Wait…Ren’Py can do that?? I NEED TO KNOW HOW TO DO THAT”…)

What does a day of making games look like to you? Can you walk us through a few of the things you do?

Nah, really, there’s not much of a “typical” day for me—sometimes it’s twelve hours of just drawing, sometimes it’s writing, sometimes I spend all day trying to bend Ren’Py to my will (and usually wind up almost in tears before I figure out whatever dumb coding mistake I’m making). Sometimes I do a bit of everything in one day, sometimes I plan to do game dev work and end up cleaning the house instead… it really varies. I’ve never been very good at forcing myself to work on things when I don’t want to, so I have to trick myself into accomplishing things by constantly switching tasks to keep my dumb brain from getting bored and deciding to just scroll Twitter all day. 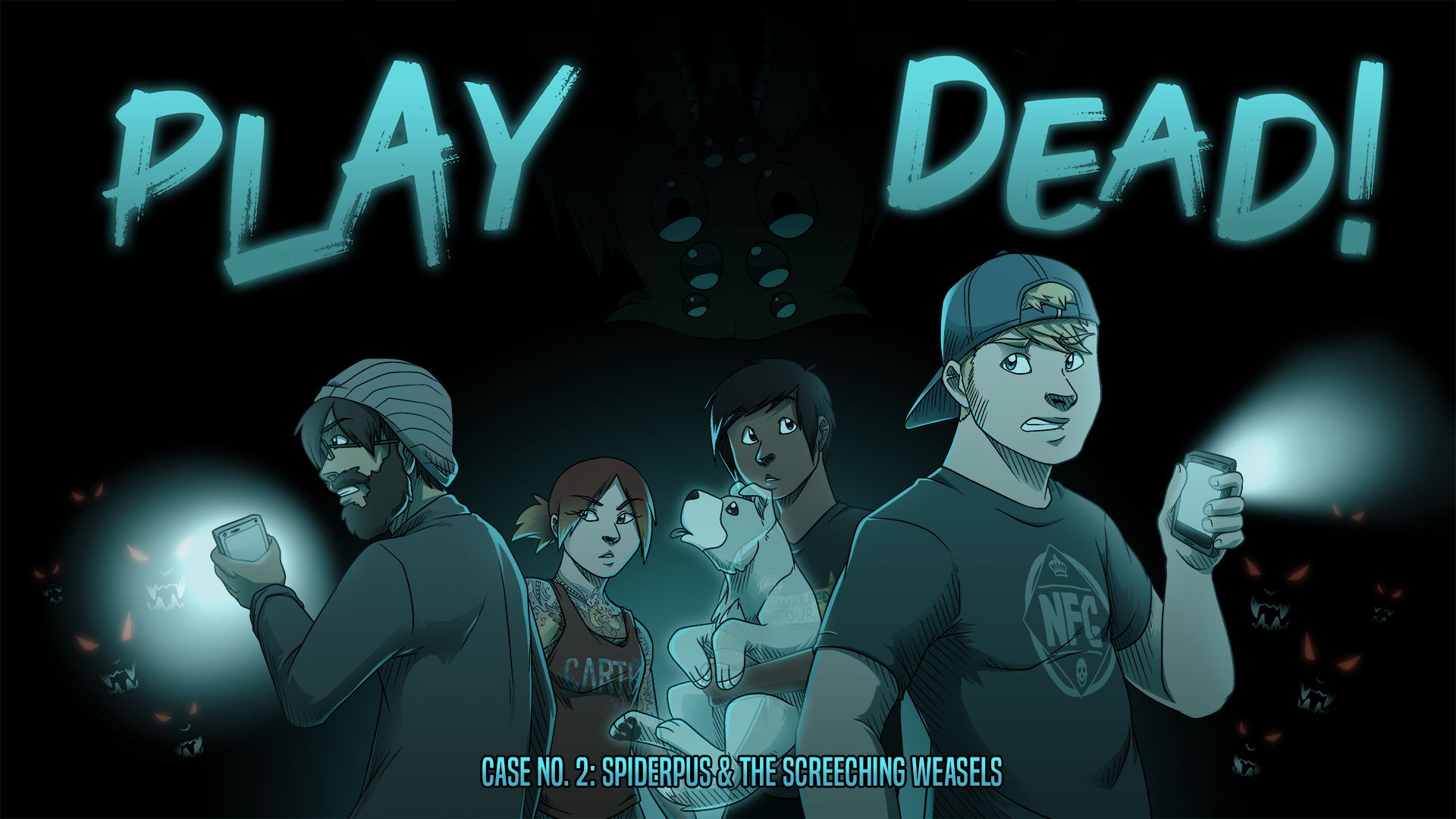 You’re an artist, writer, and game developer. For you, what’s the most exciting part of making a visual novel?

I’m kind of an artist first and foremost; that’s the one thing I do that I’m reasonably confident that I’m actually good at, ahaha. So, the art is usually my favorite part to work on, but the most exciting part is actually seeing everything come together as a finished product (and the sigh of relief after hitting the release button).

(I will tell you that my least favorite part is probably programming in the audio, but it adds so much to the final product that it’s kind of a necessary evil.)

You have a few projects in development currently. Can you tell us about them?

DreamCatcher: Reflections is the above-mentioned reboot of my webcomic, and is a portal fantasy story about a girl who actually wants to stay in the parallel world she’s whisked away to—because, y’know, going on adventures and fighting monsters is way more interesting than high school. It’s very inspired by isekai anime and JRPGs, and personally I am having a blast rewriting all the old comic material to be…well, better.

Play Dead! is a comedic, Scooby-Doo-esque horror/urban fantasy story about a touring pop punk band who accidentally adopt a ghost dog, and suddenly can’t stop getting into supernatural shenanigans on the road. They encounter everything from a wacky spider-octopus monster in the basement of a venue they’re playing, to another band that are probably vampires, to a haunted payphone in their green room, all usually while chasing their undead pet.

Both series are episodic in nature with chapters releasing every couple of months, and both contain a lot of art—usually 30-some unique CGs/backgrounds per episode. Also, both projects have recently had voice acting added! 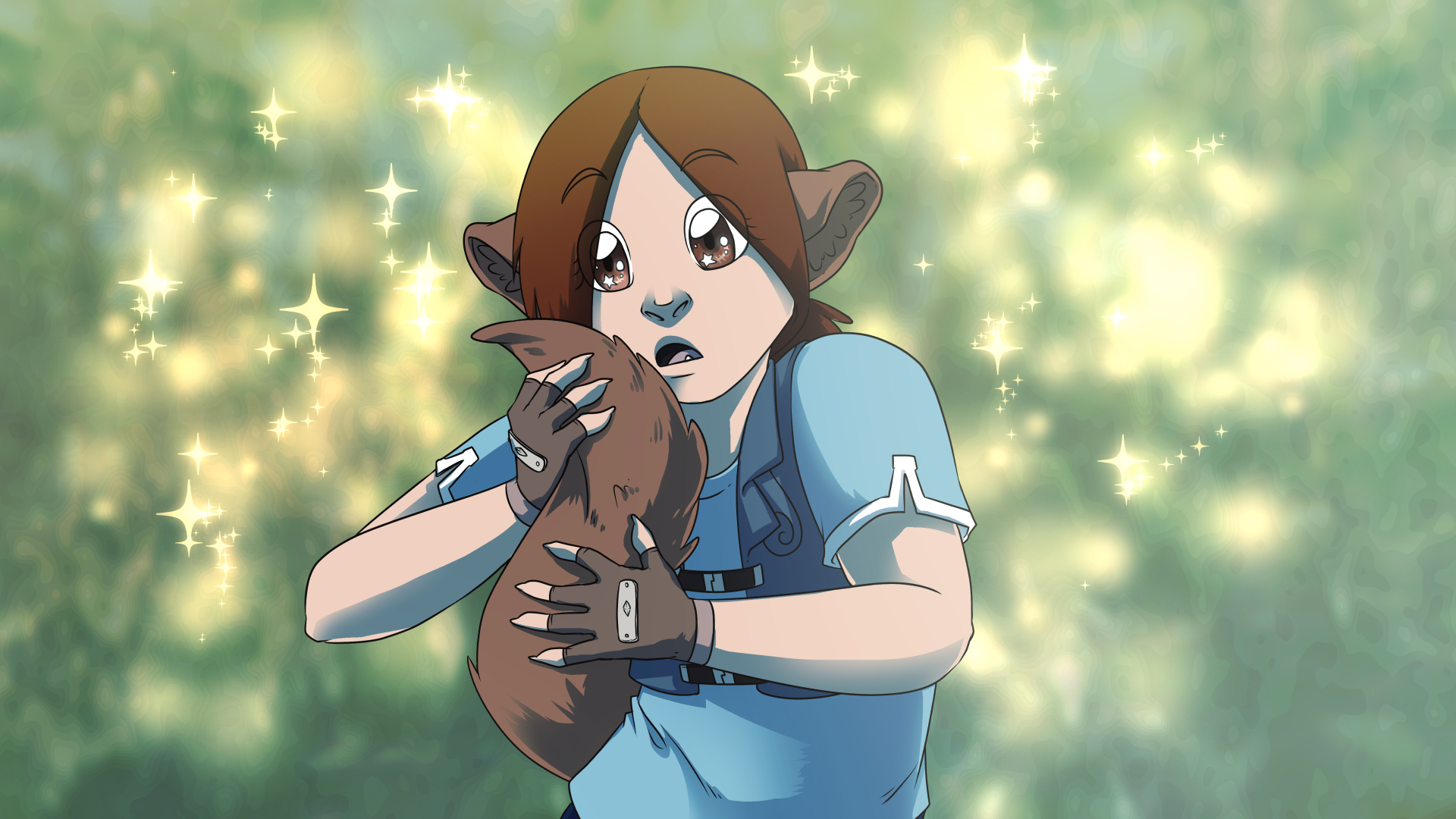 DreamCatcher is an episodic visual novel. Can you speak a bit about what the thinking process is when planning a game with multiple parts?

I came into this project thinking like a comic creator, not a game dev, and frankly I’ve stuck to that mindset a lot with DCR. I have a chapter-by-chapter outline for the whole story, and the writing is always 10-15 chapters ahead of whichever one I’m working on releasing at any given time. I’m used to putting out content fairly regularly, so the thought of spending years doing an entire project start to finish before releasing any of it to the public never even crossed my mind haha. Even switching from releasing comic pages twice a week to an entire VN chapter every couple of months was quite a change for me. That said, DCR is a kinetic VN, so I’m kind of playing on easy mode since I don’t have to worry about multiple story routes and choices and all that—that would get way too complicated, way too fast for a story of this length, I think.

Play Dead! follows a similar pattern, though that one doesn’t have as much of a writing buffer since it’s a much newer, much shorter series. The flipside is that I’m playing with branching dialogue and choices and more “gameplay” elements with that story, since I’ve been able to really write it for a game format from the getgo instead of reworking old material. 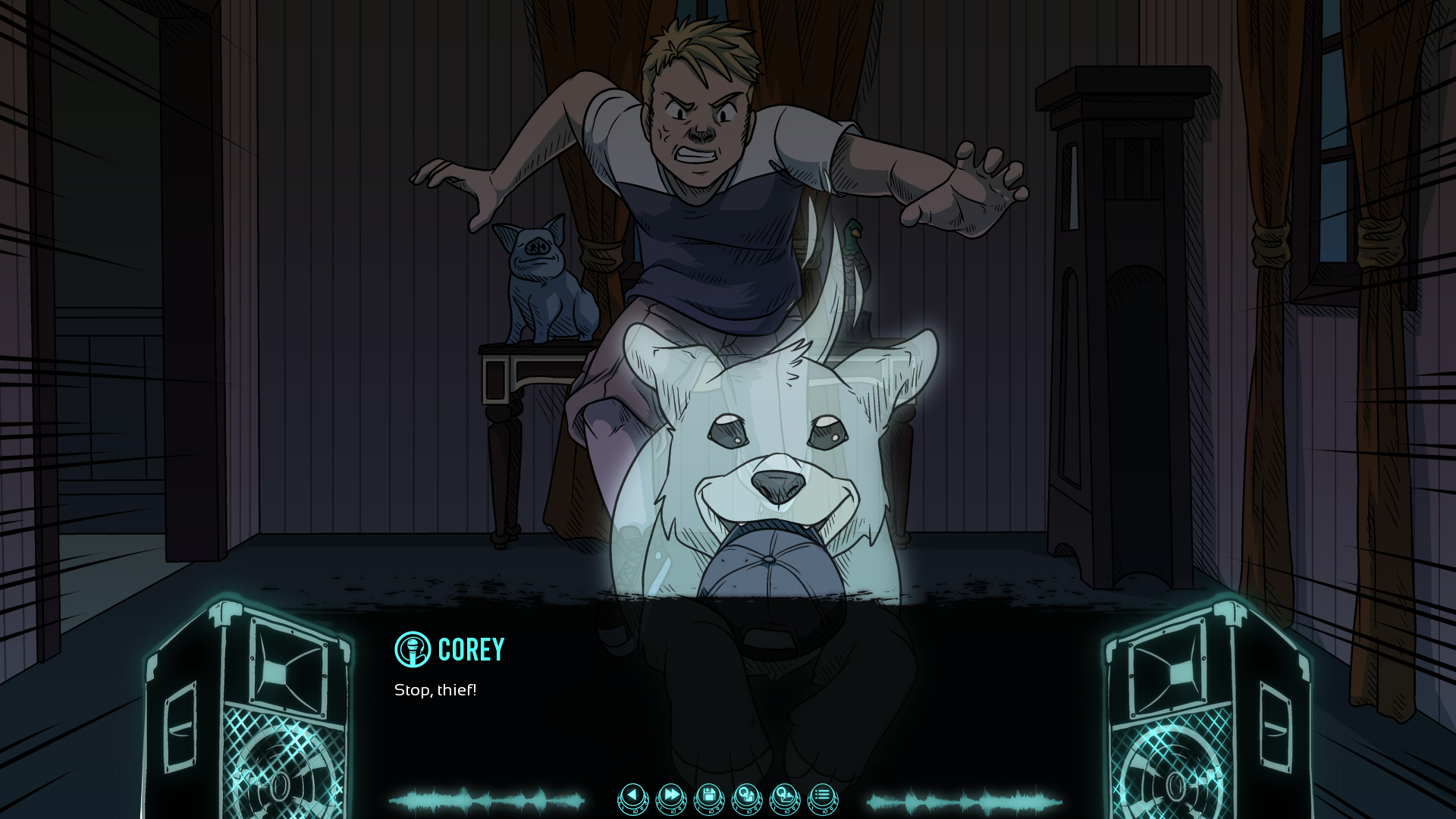 How do you balance creating multiple projects at once?

In all seriousness, juggling multiple projects is sort of second nature to me; I’ve always been that person that has multiple jobs (I currently have three actual jobs on top of this VN dev thing…) and wears multiple hats at said jobs—I get really bored, really fast working on the same thing all the time, so it actually works out better for me to have a bunch of things going so I can always get something accomplished. So, say I’m just not in the mood to draw one day—there’s always some coding to be done instead. If I just can’t bring myself to look at DCR, I’ll work on Play Dead for a bit, or vice versa. I know this sounds like a crazy process, and it is, but it works for me personally. (And again, sometimes I just put VN work aside altogether for a day or two and do housework or run errands, or even…*gasp* hang out with friends!)

Are you able to share any new information about your current projects? What can readers look forward to?

It’s kind of hard to say what readers can look forward to because I always think whatever the next part of the story is  super exciting and interesting. I do get to introduce a bunch of new characters in the next couple chapters of both DreamCatcher and Play Dead; that’s always fun. There are a few coming up that I really enjoy writing and drawing and I’m excited for everyone else to meet them!

(I’m also excited to make more niche music references in Play Dead that no one will get. I get way more of a kick out of that than I probably should.)

Want to hear more from Skelebun Studios? You can follow them on Twitter for updates on development and get their games on Itch.io and Steam!