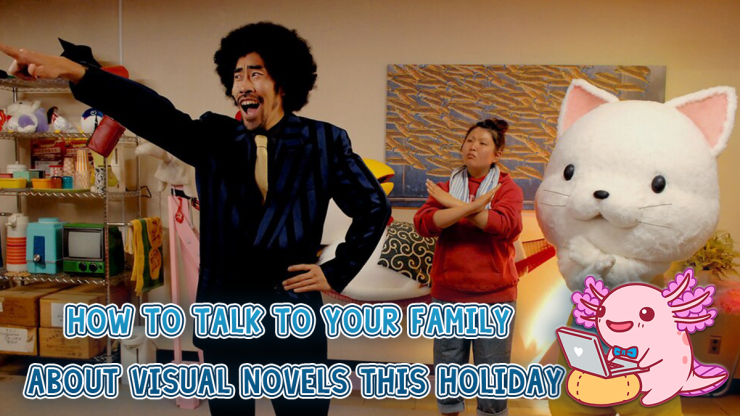 How to Talk to Your Family About Visual Novels This Holiday

Oh no. You’ve done it.
You’ve revealed to your family that you play visual novels. What you do from here is up to you.

The conversation had been pleasant enough when you all sat down for a holiday dinner with the family. Then Aunt Sheryl (because isn’t it always Aunt Sheryl?) turns to you and asks what seems like an innocent question. “What have you been up to lately?” she says. “Do anything fun? Exciting?” You laugh a little. “Exciting? Oh no, not really. Just replaying some Hatoful Boyfriend.” She stares. The table stares. You realize what words just left your mouth. “Hah-toe-full Boyfriend? What’s that?”

What you do from here is up to you.

Consider the actual nature of the game you’re playing and its inherent weirdness. 428: Shibuya Scramble or Famicom Detective Club? Well, those are just fun crime investigation games. Perfectly reasonable. Who’s going to question you if you describe Danganronpa as a murder mystery? No one, that’s who. Maybe you’re simply managing a cat cafe or an idol group. And if you side-step that King Arthur’s a hot anime girl, it’s unlikely anyone will dig very far into that “historical fantasy adventure.”

Now, of course, if you’ve spent the last week dating single dads or monsters or ungulates or even Colonel Sanders, then that might get a little more complicated. But, surely, a gentle handwave of “a game about friendship” should be sufficient.

Meet Them at Their Level

Perhaps content’s not an issue or the nature of the medium in which you’ve chosen to spend your time is of slightly more interest to your adoring family. How do you describe what a visual novel is?

Perhaps, if they are big readers, they’re familiar with Choose Your Own Adventure books. Even if you haven’t read them, the concept is part of the cultural zeitgeist at this point. “Well, it’s a bit like that, Grandpapa, but it’s on the computer.” An interactive graphic novel. An anime or cartoon you can change the outcome of. An adventure game with a maybe a little less point and click, you might say. Bit like Bandersnatch on Netflix, remember how popular that was? Like that, but reading. “I used to play a game like that at the arcade as a kid,” Uncle Jim might say. “Ahah!” You might reply. “Yes, Uncle, it’s just like Dragon’s Lair but a bit more dialogue.” “That sounds like [insert Telltale or Quantic Dream game],” one of your cousins might say, and you’ll just nod because yeah, that’s not too far off, actually.

Because that’s the secret of visual novels. They are simply part of a grand tradition of people enjoying the chance to make a story their own. Perhaps you can even leave dinner with a convert.

But still maybe we find ourselves wanting to explore the nuances of what makes visual novels unique. Absolutely valid.

However, I would like you to imagine, for a moment, explaining to your grandmother what “yaoi” is, then watching in horror as she asks Siri to pull up examples on her phone. Because while we know, as players, that it’s a vast and nuanced subgenre, that won’t be what she finds. And now you have more explaining to do.

Now do that again with “reverse harem.”

It’s an unfortunate side effect of the medium’s history.

But even beyond that, would dropping “otome” or “amare” or “nakige” provide clarity or just create confusion? It’s another unfortunate side effect of the medium’s history, but it at least gives you an interesting path to choose. Do you translate into a language they understand? Or be the cousin with a mysterious foreign hobby?

“It’s a game where you date birds, Aunt Sheryl.”

“You date birds. You’re a human girl who goes to a school for pigeons as part of a cultural exchange program. And you date the birds.”