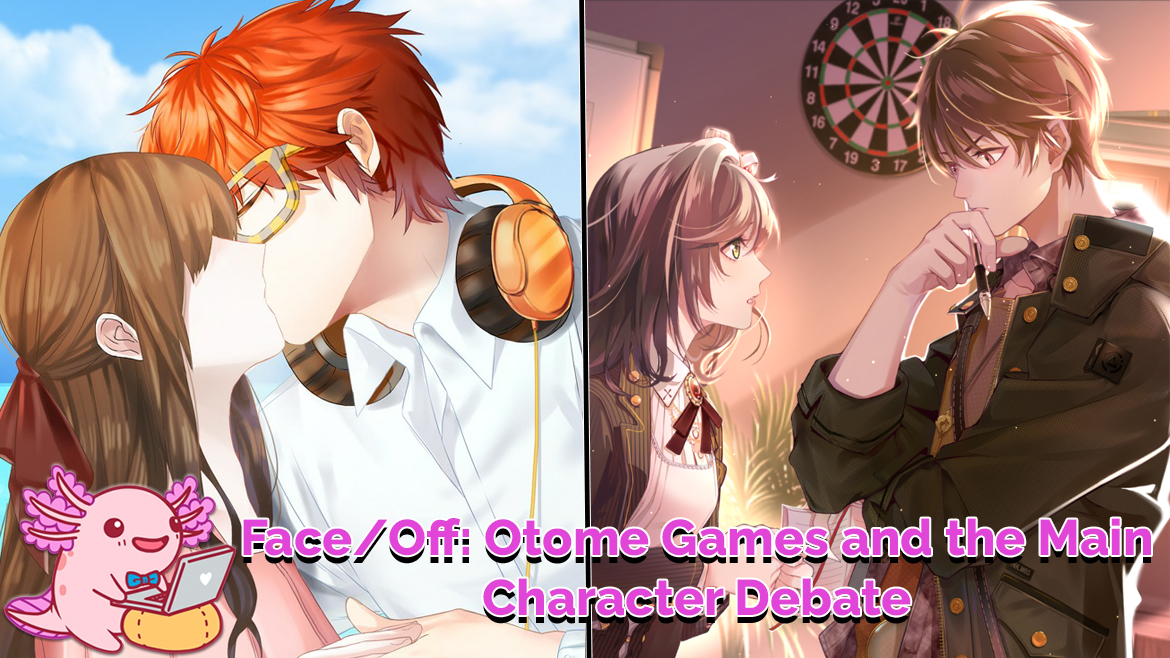 Does it matter whether the main character is a self-insert or an established persona? The answer is no, but is it that simple? Which is best for newcomers, and how can otome games build new audiences best?

Visual novels, and especially otome games, got a big injection of interest earlier this month with the release of miHoYo’s anticipated Tears of Themis releasing in English on mobile platforms, and with it came a renewed debate about protagonists—specifically, which is better: the faceless self-insert, or the established character who players follow through the story? I was curious to see what people’s thoughts were, so I conducted a rather informal Twitter poll on the matter, with a somewhat shocking result: almost 3/4ths of respondents said they preferred observing a character’s journey rather than self-inserting as the main character!

Putting on a Mask

One particular sticking point in visual novels is that playing a character isn’t the same as becoming a character. In general, most visual novels ask players to assume one of two roles: being a generally blank-slate character or observing an already established character, and what happens to them during the course of the game. In both cases, players will usually make direct choices that influence how things happen, with the biggest difference being in how that choice is meant to impact the overall experience of the player. As a blank-slate, the player’s choices are meant to reflect directly on their assumed persona, while the established character is simply being placed on certain paths and seeing what the character thinks. These differences might seem slight or even meaningless to experienced visual novel players, but what about new players, curious to try out visual novels (here, especially, otome games) for the first time?

While a contentious take, this author believes that games that allow players to observe a character rather than worry about being a character make for better introductions to the genre. The differences might seem slight, but they are important, and relieve some of the basic worry about choices even if it seems invisible or unimportant at first. For a beginner, games like Tears of Themis make for great places to start with otome games, before spreading to other, more in-depth games.

The Eyes of the Beholder

In Tears of Themis, players take on the role of a main character you name, but goes by the codename Rosa. One particular strength here is that the game uses somewhat familiar game mechanics (such as a rock/paper/scissors style combat system, card levelling, and even some similarities to games like Ace Attorney) to help engage players with the visual novel aspects of the game. Draping engaging, but simple, gameplay over the otome game core of Tears of Themis makes it far easier for players who have never tried the genre, or think the genre is only about dating simulators, to give things a try and discover an appreciation for the genre. It also breaks up the text-only nature of visual novels with fairly simple gameplay loops, far similar to those found in mobile puzzle games than anything hardcore or taxing. While this means that there are more “game” elements, it helps newcomers to visual novels surpass the sometimes daunting walls of text that these games come with, while giving incentives for players to keep engaged with the game (and, probably, spend money).

In this sense, it is actually important to note the connection between Tears of Themis and Ace Attorney—many Western players may be able to trace their love of visual novels to trying the Ace Attorney games, which introduced visual novel style mechanics combined with point and click adventure games, making it easy for newcomers to observe the story of Phoenix and his trials, rather than worry about having to become a character and live their life in this world. While not a visual novel itself, Ace Attorney‘s trial system and heavy focus on text based narrative were fairly unique to players like myself, who, at the time, had never played text-based games much, either due to lack of availability or not knowing that these kinds of games existed. While, yes, Ace Attorney may not be a pure visual novel and shares a lot of DNA with adventure games, for myself, it was my first introduction to visual novel style games—games that focused far more on storytelling than gameplay—and from there, I began my journey into VNs with games like Ever17, Tsukihime, and Higurashi When They Cry, all of which asked me to see things happening to characters rather than create my own blank slate character. It wasn’t for quite a while until I played a dating sim, and my first otome game was even further away!

Tears of Themis is very similar, allowing new players to (perhaps unknowingly) dip their toe into the otome game genre by giving players a character to observe, and then watching what happens to her over the course of the gameplay scenarios. The outcomes are fairly binary, meaning that players get a chance to simply try again if things go wrong. Observer-style visual novels in this vein help alleviate the other hassles of visual novels: having to juggle routes and worry about choices affecting the story, by instead having a fairly linear storyline that follows a character along simple paths. This makes the game easy to sell to people who are curious, and requires far little investment from players in terms of having to know what to do or even when to do it, and once they’ve played or are comfortable, may make it easier for players to branch out to more complex games.

Let Me See Your Phone

Mobile gaming has made this even easier, as a wealth of visual novels exist on mobile app stores, with tons of great titles and content to choose from. Otome games, which tend to have small market representation, have a fairly large amount of titles available on phones, but one of the biggest, Mystic Messenger, exists at the opposite end of the spectrum from Tears of Themis. As Tears of Themis was gearing up for release, I noticed a lot of comparisons between the two games, which is what led me to thinking about the question presented in this very article: which game would be best for a beginner? And, in that respect, Mystic Messenger presents a fairly good answer: not this one. While Mystic Messenger is one of my favorite games, it is an intense and demanding visual novel that is hard for new players to crack. That doesn’t mean it is impossible, and given the popularity of the game, certainly many new to the genre fans of otome games have likely made Mystic Messenger their first, but if I were to suggest one to people, I think I would lean towards Tears of Themis.

Mystic Messenger presents many of the pros and cons of the “blank slate” character that make these games more complex for players to handle: the interactions are more direct and personal, but your character barely exists and the choices you’re given in the game can sometimes feel inorganic; since this character is “you”, but “you” wouldn’t act this way, it can make for some odd moments and story beats that can break immersion. However, Mystic Messenger’s unique use of your phone as an integral tool in the game really does build immersion in a way no other game has — since the player is “you”, it makes sense that characters actually call you on your own phone, right? While timing and life might get in the way, it was an amazing touch that made the game occasionally feel like it was happening in real time, to me, rather than just a story I was reading.

But Mystic Messenger also asked me to give a considerable amount of my time to it, because I felt so attached to the world it created around “me” that I had to keep going. For newer players, or people just trying to dip their toe into the genre, this can present a fairly daunting ask; do they really have the time or interest to devote to something so massive? And if they don’t, are they wasting their time or money on it? Instead, it’s fairly worth considering whether lower stakes, easier (but robust) games make better entry points into visual novels than “blank slate” games.

From a developer’s perspective, it’s always worth asking who your game is primarily for. If your target is seasoned genre veterans, then your game is likely to scare away players who are less inclined to throw themselves into it without any experience. Other types of games regularly deal with this (and in the wake of games like Dark Souls, some games now sell themselves solely on how impenetrable they are). But visual novels don’t quite enjoy the easy market share that these other game do — if players perceive visual novels as simple walls of texts or dating sims, then it’s likely due to a perception based on the games new players are generally trying out, usually those that are popular or gaining lots of buzz, but not necessarily those that are best to start out the genre with.

In that regard, it isn’t really important which type of protagonist is “better” for players, but it’s perhaps important to think about how your protagonist can help players better get comfortable with the genre as a whole. If your game is meant to be a larger, mass market style game, then the “observer” role for players seems to be an attractive option for beginners and experienced players. However, thinking back to my poll, I was surprised at how many people selected “established character,” as many of those who took the poll are themselves experienced players. While that could just be personal and polling bias, it also begs a question as to whether otome games have a different set of audience expectations than other visual novels beyond “being for women.” Is it possible, perhaps, to infer that otome game players prefer to see a story unfold, rather than “be” the story? While more would need to be done to find the answer to that question, it certainly does make me curious to find out more about what people think on this topic.

As visual novels and otome games become more popular, it makes sense that more and more new players, and players looking for new experiences, will come to the genre. In that regard, thinking hard about why your protagonist is a blank slate or an established character is not only important to the story you’re telling, but it can also help determine the ways players think about visual novels overall, and their enjoyment of the genre too. While that might seem like a huge weight for any single game to bear, at the very least, it presents an interesting way to consider who a game is for and where that game can go, and where visual novels can go in general.