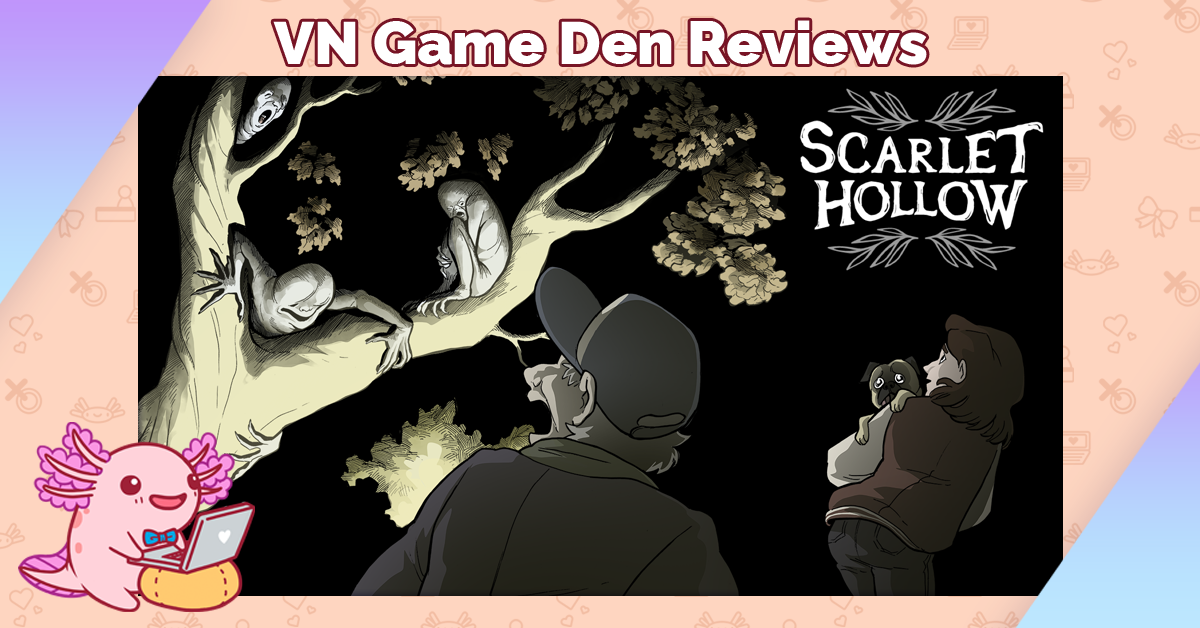 Stuck in a small Applachian mining town for a week for your estranged aunt’s funeral, you find yourself at the center of a number of strange occurrences. As you try to unravel the net of mysteries, you find your life and the fate of the entire town, is in danger, and everyone’s fate might be in your hands.

Scarlet Hollow from Abby Howard takes you to a small Appalachian mining town with secrets sitting under the surface. Stuck there for a week for your estranged aunt’s funeral, you find yourself at the center of a number of strange occurrences. As you try to unravel the net of mysteries, you find your life and the fate of the entire town are in danger, and everyone’s fate might be in your hands.

A review copy of this game was provided by the developer.

The art is a wonderful illustration of rustic spookiness. An earthy, de-saturated color palette combines with dramatic lighting and bookplate-inspired linework to set a mood that shifts from vaguely off-putting to appropriately eerie. It also breaks the sprite-on-background mold considerably. While it still uses the visual technique on occasion, it elevates its modular art to something that more closely resembles an animatic or motion comic. It feels more like a movie or television show as the character art changes position on screen and moves through an array of different body poses and expressions. It sets up these dramatic first-person point of view scenes that really drag you into the story as a reader. It also does an excellent job of tempering the horrific scenery a little bit with a darker lighting scheme in those moments. While there is still absolutely some gore, it plays more with what you can’t see as its major horror element.

It treats all its design elements with the same overall aesthetic approach. The characters, the monsters, and even the architecture has this sketchy realism to it with an overall sense of decay permeating every crevice. It casts the whole game with this lingering creepiness that never quite lifts, which is great.

It highly benefits from such a pervasive eeriness at a visual level, because the writing doesn’t always support it. There’s definitely a feeling of mystery. There’s very clearly something going on under the surface, and at an intellectual level, I’m curious what that is. I do want to know “the answer,” so to speak. I’m not entirely convinced its pacing will be effective for such a long-form story. Peaks and valleys are expected, but the lulls are really long, comparatively speaking. And in moving from low to high tension, it doesn’t really spend a lot of time building up to it. It’s just sort of there, then the event happens, then it’s gone again.

This gets complicated because the writing itself is excellent. There’s a lot of really great character voice. It has a light touch of humor. Overall, I think it’s a good mystery. It seems like there’s a lot going on, though, and that may be part of the problem. It spends its first two episodes opening a lot of plot threads. It has to throw in a lot of exposition to cover all these things, and I think that’s a factor in what slows it down and may be spreading the story a little thin. It’s a ghost story and a monster story and a small town secret story, and it may all come together in the end, but now it’s very decentralized-feeling. If it were presented in more monster-of-the-week style with each episode being self-contained, this probably wouldn’t be the case, but as a long-form horror it just leaves me with this feeling of “what’s the actual story?”

It also gets a little slowed down by what’s actually its most interesting feature, the explore conversation options, borrowing from RPGs. Among the choices that can move the story forward, there are also dialogue options that let you just examine your environment or expand your character interactions. Conceptually, it’s really cool and does provide some player-to-player variability in how the game is played. You get to choose what information you actually want to pursue, and it helps you shape your relationships in a less intrusive way. At the same time, it’s not implemented well, from both a user experience perspective and, more often than not, a narrative one. Physically, they’re just difficult to interact with. All this text is crammed into a very small space that you have to scroll though. If this were an RPG, you’d be using a dialogue wheel, for example. I think if they were going to borrow the concept, they could have also borrowed the UI. I also feel like it’s hit or miss as to whether the “Explore” options actually add anything new or interesting to the overall plot. The annoyance of interacting with them slowed some scenes down considerably for me. I just stopped doing them for long stretches of game, until it seemed like they might be important again, so I’m hoping I didn’t miss something super important for later.

The other thing they borrowed from RPG elements ended up playing out way cooler, and I think is actually the highlight of the game. At the start you can pick a special power. These special powers open up new dialogue options and story elements. They are a lot of fun and a very intriguing way of adding a sense of replayability. I’m even curious to go back and try other powers to see how they affect the story.

Scarlet Hollow is a solid horror mystery with a great story sitting somewhere just underneath the surface. It’s got small imperfections that do get in the way a little bit, and I feel like it’s still kind of waiting to meet its full potential. It’s still an excellent game that leaves me eager to see what’s going to happen in the episodes to come.

Play episodes one and two on Steam and itch.io.