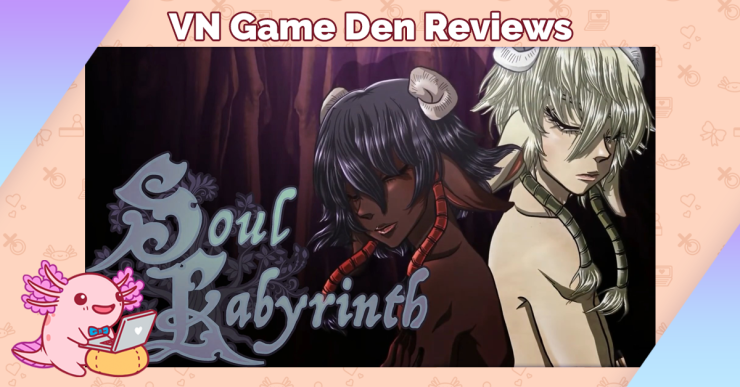 In a world divided into elves, humans, and beastkin, a young “soul weaver” must delve into the labyrinth to seek out their vassal. Navigate their relationship. Grow the bond. Defeat the evils within and without.

From Coffee Drip Studios comes the hybrid visual novel Soul Labyrinth. In a world divided into elves, humans, and beastkin, a young “soul weaver” must delve into the labyrinth to seek out their vassal. Navigate their relationship. Grow the bond. Defeat the evils within and without.

Right from the title screen, the game reveals itself to be artistically gorgeous. The backgrounds have a strong oil paint aesthetic with deep, earthy tones that drip with mystery and a slight edge of uncertainty. They’re also very well constructed from a practical perspective. Each room of the labyrinth, in particular, looks like a different room, but still reads as one large area connected together as a single piece of architecture.

The sprites are all gorgeously designed and rigged to move with animated blinks and body movements. It’s very squash and stretch centered, so when you’re looking directly at them, they can feel a little inorganic. They’re very expressive, though, and when your eyes are more focused on the text while reading, these animations turn into a more relaxed general feeling of movement in the periphery. Combined with an elegant and complex-looking opening sequence, fantastic animations, and CGs with a highly cinematic quality, the whole game looks and feels like an animated, interactive storybook.

By the end of the demo, I’m not sure I had a very strong read on the personality of the characters quite yet. The seeds were definitely there, so I think it’s just a matter of them growing a little more over time. The world that these characters live in, though, is broad and seems well-developed. If there’s any internal inconsistency, I haven’t noticed yet. I think this is because the text plays to the strengths of the setting being a looser form of world-building. It’s a fantastical dark fantasy story, and it’s easy to just go along for the ride without needing to think about it too hard.

Some of the expository setting construction can feel a little “info-dumpy” ever so often, but generally it’s built a little more into the conversation and the setting and reads more organically. The prologue is a little longer and more expository than I would typically expect, and it does take a bit to really jump into the action. Everything has such a nice, fluid, poetic flow to it, however, that it’s really easy to get hooked on the premise and push through. The inclusion of two different protagonists is also cool, and an incredible way of seeing the story from multiple perspectives.

The problem, though, is that all this great content is attached to gameplay mechanics that are simply not very good. As a hybrid, it’s built the bulk of its story so far around a point-and-click and puzzle system. It makes sense narratively and I love it conceptually, but it is not well constructed. The actual physical mechanics are very clunky. It takes three to four clicks just to observe or interact with a clue or puzzle piece. It can also be extremely difficult to tell what’s a clickable area and what’s just part of the scenery. Sometimes, yes, it makes sense for the puzzle to have something hidden and a little harder to find, but often the hit box is just too small or it’s otherwise not well-communicated visually or textually. The puzzles themselves, past the mechanical element, also lack a strong internal logic or independent solvability. The first puzzle, in particular, I’m very comfortable saying is not solvable, and you can only get past it via luck or brute force. The two “boss fights” are a little better at making it clear what you can click, but there’s little to no positive feedback to indicate you’re making the right decisions, just negative feedback when you make the wrong one.

And the brute-force, negative feedback combo wouldn’t be so bad if you weren’t also forced into a limited number of interactions. All three things you can do (observe, interact, and move) use up energy. And when that energy is used up, you get a game over. You’re pulled out of the labyrinth. It’s not a system that permits the level of trial and error that a point-and-click game of this nature requires. I lost my first time through playing blind. I got stuck in a room where I did not know what I needed to do, and I didn’t have enough clicks left to do a process of elimination and figure out what I had missed. I had to go back and watch the playthrough that the developer made, and even seeing the answers, I am not confident I would have made any of the logical jumps necessary to solve the last puzzle and the two “boss fights” without dying or getting very very frustrated when nothing seemed to be happening.

Soul Labyrinth is a great visual novel trapped in the skin of a bad-to-mediocre point-and-click game. I’m heartened by the fact it’s still a demo, because there’s still time to deconstruct and reconstruct the puzzles. They’re the one thing holding it back from being an absolutely phenomenal game.

Play the demo now on itch.io.