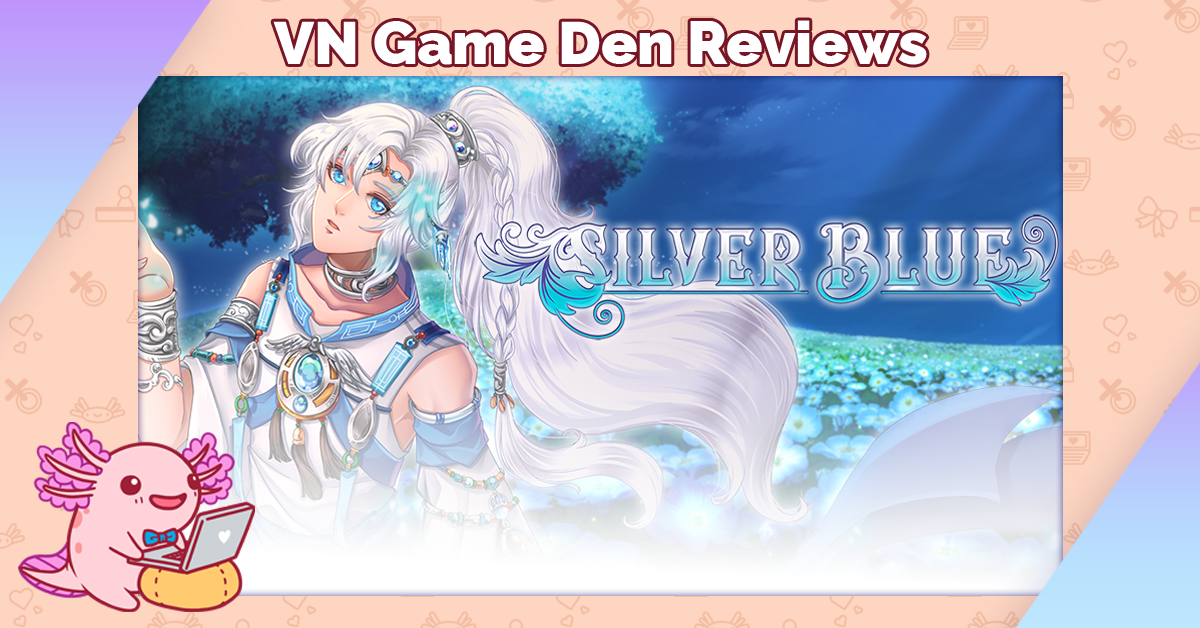 With no memory of his childhood, Cyan lived a peaceful life with his guardian Gui. When Gui disappears, however, Cyan sets out on a cross-country journey to find him. Along the way, he meets new, strange people and the dreams that have haunted him his whole life begin to become clearer, sending his identity and sense of being into question.

The debut game from Bun Bo Soup, Silver Blue is a fantasy BL game set in a world severed from the gods that once lived alongside humans there. With no memory of his childhood, Cyan lived a peaceful life with his guardian Gui. When Gui disappears, however, Cyan sets out on a cross-country journey to find him. Along the way, he meets new, strange people, and the dreams that have haunted him his whole life begin to become clearer, sending his identity and sense of being into question.

The first demo for Silver Blue was originally released for Yaoi Game Jam and Summer Novel Festival 2020. The current extended demo is an iteration of this with additional content. A review for this game was requested through the VN Game Den review request form, and an advance copy of the extended demo was provided before public release.

This is a great-looking game. No doubt about it. The sprites are sharp and polished with elegant character designs. The costuming lacks any notions of time or place, which works great in the sort of generalized fantasy setting the game lives in. The characters are fairly standard pretty-boy ikemen and their expressions are a little reserved, but they’re fun to look at.

The backgrounds are gorgeous. The landscapes are earthy with a lot of wonderful natural light. The interiors are homey and warm. The CG work is also fantastic with a great sense of framing. There’s also just a lot of them. With an ornate UI scheme to match it, the overall look of the game is great and rivals the work of larger studios. For such a small art team, they’ve done an incredible and commendable amount of high-quality work that really elevates this game visually.

It does get a little tricky in its writing, though. It does a lot of things well, but it has some minor weirdness to it. After a very brief mood-setting introduction, it throws you into the story and the setting without feeling the need to hold your hand and tiptoe you through long expositions. You immediately understand the nature of Cyan and Gui’s relationship and a general feeling of everyone’s character. The character interactions as a whole are wonderful. There’s a great sense of interpersonal tension and some hints at real stakes in regards to relationships falling apart or going awry. The CG-supported scenes in particular create an excellent amount of spice and intrigue to a story that, at times, can feel a little aimless.

There’s a fairly simple central conflict and intention of story (Cyan going on a journey to find someone), but it’s hard to tell just from that where the story might go and what sub-conflicts will arise along the way. Some of that uncertainty comes from the way the world is built for the player, particularly through Cyan’s reaction to it. I had a hard time consistently clocking what he knew, what he didn’t, and what was “normal” for the world he’s living in. Some of his reactions I just didn’t quite understand in the grand scheme of things. Since I’m not really sure what the rules of the world are, it’s more difficult to set expectations. Without established expectations, I’m not totally sure what to anticipate from the larger story. Tonally, it walks a really great middle ground between light fantasy and fairy tale, but it can feel a little scattered and decentralized from a cohesive structure and theme.

At a smaller scale, the writing is serviceable but inelegant. It’s not clunky, per se, but it doesn’t really flow from line to line particularly well. They do an excellent job of building tension and setting tone for the most part, but sometimes the language itself makes some slightly off wording and structure choices. It suffers a little from some of the symptoms one sees in translated texts or from writers with English as a second language (which is likely the case from what appears to be a largely Vietnamese core team). I see a benefit, long-term, from another editing pass focused on smoothing things out for native English readers.

Overall, what I like most about this extended demo is the potential for what the game could be, in the end. It’s unlikely Silver Blue will be groundbreaking or do anything particularly new for the medium. As a standard PG-13 light-fantasy BL game, however, it promises to hit all the expected marks and deliver a really enjoyable, high-content package for fans of the genre.

The extended demo is available now on itch.io.