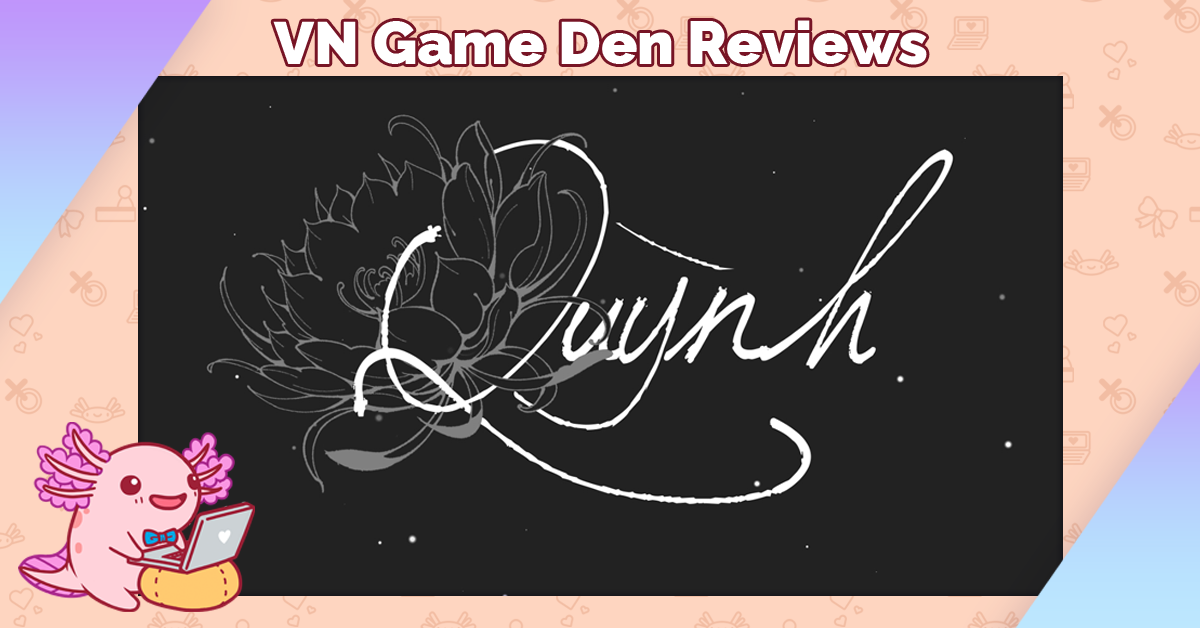 When you wake up in a mysterious shop with no memories, the owner and his companion seem to know you better than you know yourself and are more than happy to keep you around as an errand boy. Quickly, things are revealed to be more supernatural than they appear on the surface, and the true, darker nature of the shop becomes clear.

From Vietnamese developer Bun Bo Soup, the first chapter of Quỳnh was developed for Yaoi Game Jam 2021. When you wake up in a mysterious shop with no memories, the owner and his companion seem to know you better than you know yourself and are more than happy to keep you around as an errand boy. Quickly, things are revealed to be more supernatural than they appear on the surface, and the true, darker nature of the shop becomes clear.

The art is lovely and somber with deep, desaturated colors in neutrals and grays and blues. The character design itself is fine. The group of men are interesting to look at, but there’s a plainness about them that suits the overall feel. They aren’t terribly emotive, though. This is almost expected in the one-shot characters, as they may not come back. From a technical perspective, the developer may have decided to spend less time on that set of assets, and that’s not an unreasonable decision from a development perspective. Even the presumably recurring characters, however, are a little underwhelming in their emotional responses. The implementation of them, as well, is a little weird. They have odd transitions, and their movement across the screen is a bit strange. So artistically, the sprites look great, but the technical parts are lacking something.

The writing is generally good, but it does have some slight issues. The overall story from a narrative perspective is excellent. It’s mysterious and strange and paced extremely well to draw you in. The main character begins with amnesia, and that acts as a wonderful conduit for the exploration of the setting and the story. As a reader, you’re learning at the same time he is. The world is opening up at the same time and pace. It’s very interesting and creates a nice, strong connection to the main character and to the story. The blend of known, unknown, and the promise of an explanation is well-balanced. You’re never so confused that you can’t follow, and the story lays itself out in such a way that you’re comfortable just going along for the ride until things become more clear. The characters all have a strong dynamic, and the central characters of the first chapter have a heartbreaking and engaging story around them.

Where the writing finds itself lacking a little is in the text itself, but it feels to me more like an artifact of a writer not fully fluent in English than any lack of prosaic skill. There’s just this very light off-ness to everything that makes reading a little clunky-feeling sometimes. As is this just the first chapter in a longer game and is marked as a demo, I see it still having time to smooth that out with an additional English-language editing pass that focuses on fluent readability and style.

There’s also some discussion about an off-screen character with mental health issues that feels like some key factual pieces of information. They’re described as having schizophrenia, but the symptoms described don’t read that way, instead appearing more like a fantasized version of dissociative identity disorder. I think this specific story in this chapter and the circumstances of it do leave room for a very interesting conversation about of the intersection of identity and the nature of the soul in regard to those, particularly when a disorder that skews personality and the perception of reality is involved. But I just don’t know if it was handled very well. I think there’s a possibility that part of the issue is simply translation, but there’s definitely still a gap in the knowledge base evident.

What I do think I like most about this game so far, is that despite the areas in which it’s lacking, it’s got a wonderful holistic mood to it. Between the art, writing, UI, and soundtrack, it feels like a game that really has a certain narrative experience in mind and executed on it wonderfully. This is the first chapter of eight, according to the game page, and I’m left with an eagerness to see how the rest of the parts go. It really strikes me as something that has the potential to really be more than the sum of its parts. So even with the flaws, the overall play experience is excellent.

Quỳnh is a strange and somber story steeped in a deep and enchanting mystery. It winds a story tinged with Vietnamese culture around the reader and takes them on a slow journey through that fine place between reality and fantasy, between magic and the mundane, to tackle heady discussions of life and death.

Get the demo now on itch.io.