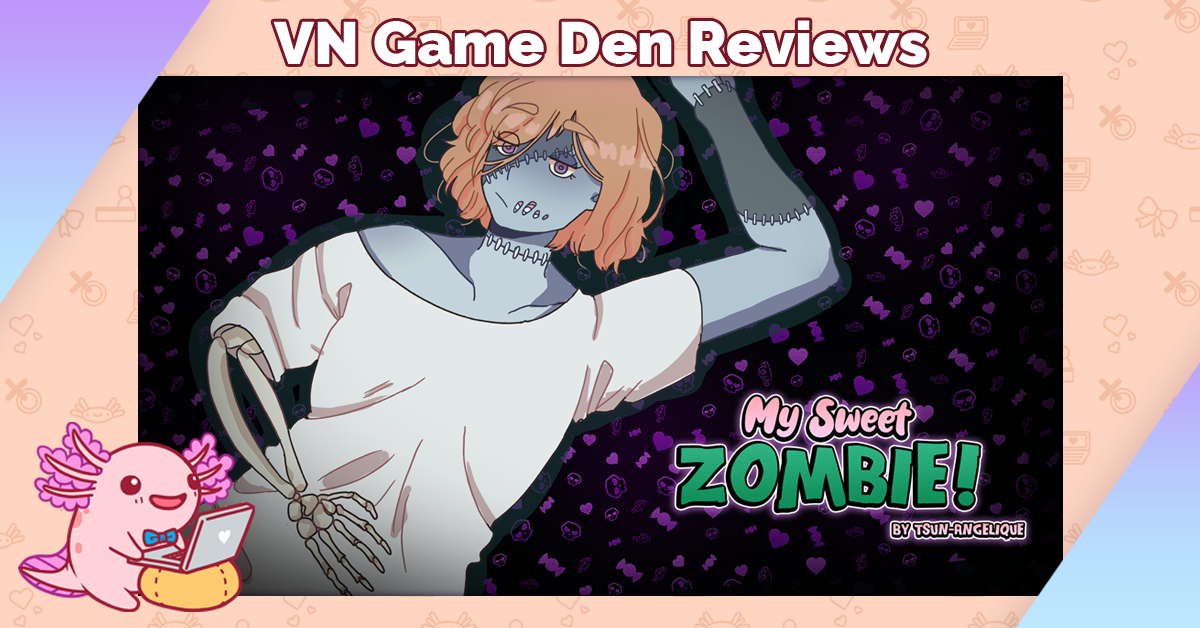 While Sam Chen loves to bake, family expectations and a full-time job at a cafe means she rarely has time to do what she loves. With a stable career as an accountant on the table, though, she may see her whole life change…even more so when a very interesting, one-armed visitor shows up after closing up the shop.

From a team led by Tsun-Angelique, My Sweet Zombie follows recent college graduate Sam Chen. While she loves to bake, family expectations and a full-time job at a cafe means she rarely has time to do what she loves. With a stable career as an accountant on the table, though, she may see her whole life change…even more so when a very interesting, one-armed visitor shows up after closing up the shop.

A review for the demo of this game was requested through the VN Game Den review request form.

To start, the art is cute without being cartoonish, child-like, or cutesy. It’s a little reminiscent of the style one might see in a comedy josei manga without necessarily dipping into that “traditional anime” aesthetic. On top of that, there’s a lot of movement in the sprite work. It’s expressive with a lot of facial changes, outfit changes, body movements, and little cartoon-style effects.

The backgrounds are well-constructed and the right amount of detailed, creating a nice set piece for the characters without feeling cluttered. The CGs also make good work of laying out the space and having good scene work. Then between transitions, cuts, and use of a small phone interface, the overall art construction and aesthetic is lively and fun and delightful to look at it.

The writing is snappy and quick with a sort of sarcastic feel to it that stills strikes as genuine underneath. Our main character, Samantha, has a strong inner monologue, and it really carries well through the overall story. It’s a little bit slice of life. It’s a little bit mystery. And it’s a little bit supernatural, without leaning into any one of those elements particularly hard. The inherent weirdness of the zombie story paired with the very basic day-to-day of our main character creates a story with a very broad appeal that has a lot to offer narratively as it continues and finishes out its story.

Then on top of this is a very earnest approach to and perception of the struggles of young adulthood. It’s got a lot of very “real” elements that contrast in a very fun and funny way with the weird zombie plot. The story is less about a monster and more about the mundanity of having a roommate for the first time and forming new friendships. The zombie part, then, just adds a fun twist on what’s otherwise a typical story.

This is all supported by an absolutely delightful cast of characters so far. All three of our leads have strong characterizations of their own. They’re endearing and highly likable. There’s yet to be a character appearing that I don’t like. They also just have wonderful dynamics between each other. This is all made all the more impactful by a very lovely voice cast. There’s no spoken dialogue as far as lines, relying instead on reactions and vocal inserts. They’re so well-placed and picked just right that even these small inserts really have a lot of character in them.

So far, My Sweet Zombie is proving itself to be a game that knows exactly what it’s doing and how it wants to do it, with a promise that they’re going to do it well. It’s fun and sweet, and the full release will likely be an instant favorite for many.

Check out the demo on itch.io. A full release has been announced for January 2022.