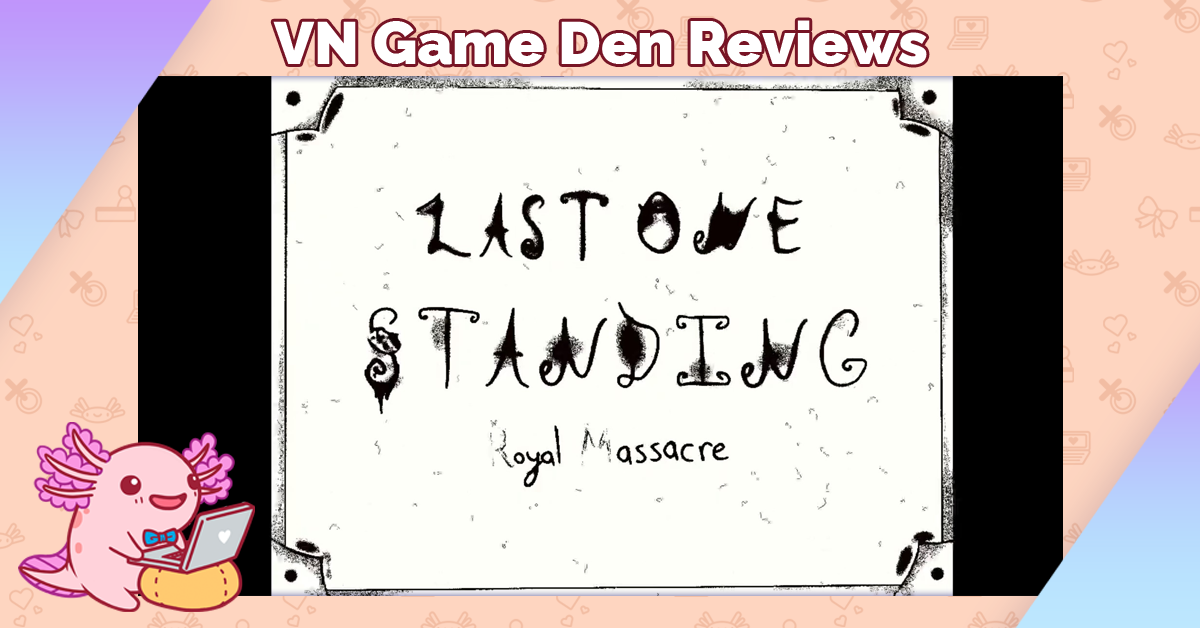 15 teenagers wake up in a mysterious castle and learn they will be forced to participate in a deadly competition.
Check out our thoughts on the prologue of Last One Standing: Royal Massacre.

VN Game Den received a request from the developer to review the demo of Last One Standing: Royal Massacre.

Last One Standing: Royal Massacre begins with a teenage boy named Kostya Evanoff waking up to find he’s been kidnapped and brought to a mysterious castle. He meets a girl named Olesya, and they begin to explore the castle in the hopes of finding out what is going on. They quickly learn they aren’t alone. Fifteen teenagers in total have been brought to this castle, and no one knows how or why.

The art of Last One Standing stands out as soon as you begin playing. Backgrounds are very minimal, with only the most important details depicted. Meanwhile, the character sprites have a distinctive style that takes a little bit of time to get used to. Although I found it jarring at first, the appearance of the characters did start to grow on me by the end of the demo. As you might guess from the character names, the game is set in Russia, which isn’t a setting used as often as some in visual novels.

The demo is the game’s prologue, and it mainly follows Kostya and Olesya as they meet the other characters and begin to understand their situation. Introducing so many characters in such a short period of time is difficult, and aside from a few whose quirks were blatant enough to really make an impression, they started to blur together. However, if more attention is given to them gradually in the chapters to come, that should improve. There are a few dialogue choices from time to time, although at this point it’s not clear if they have any effect beyond changing the ensuing dialogue.

The dialogue overall feels a bit forced at times, although part of that might be due to the game trying to drive home the eccentricities of some of the characters (such as one who immediately begins pestering other characters and throwing accusations around). Due to the nature of the prologue, some of it also starts to feel repetitive as everyone confirms that they don’t remember anything and have no idea why they might be there.

You’ll be doing more than just reading dialogue, however. While Last One Standing is a visual novel, it’s also partly an adventure game. There is a map of the castle that you can bring up to choose different rooms to visit. In each room, after talking to any characters present, you can also click on objects in the environment to get some commentary from Kostya about them. This is all basically just flavor text in the demo, but it feels likely that the main game will involve more investigatory elements.

After the characters finish their exploration, they attempt to escape, only to learn they’re well and truly trapped inside the castle. Then a mysterious man who claims to be a king appears and tells them he’s brought them all there to force them to participate in a deadly game. They must kill one another to escape, and if someone dies, the others will need to investigate the murder. If the guilty person is accused, they will die, but if you accuse someone innocent, you will die instead. The demo ends shortly after this revelation, after they’ve all been given rooms where they’ll spend the night while in the castle.

This basic premise is a familiar one, and unfortunately Last One Standing hasn’t done enough with its story and characters yet to draw me in beyond that. It might have a compelling story to tell, but for now we’ll just have to wait and see.

You can download the demo for Last One Standing: Royal Massacre from itch.io.