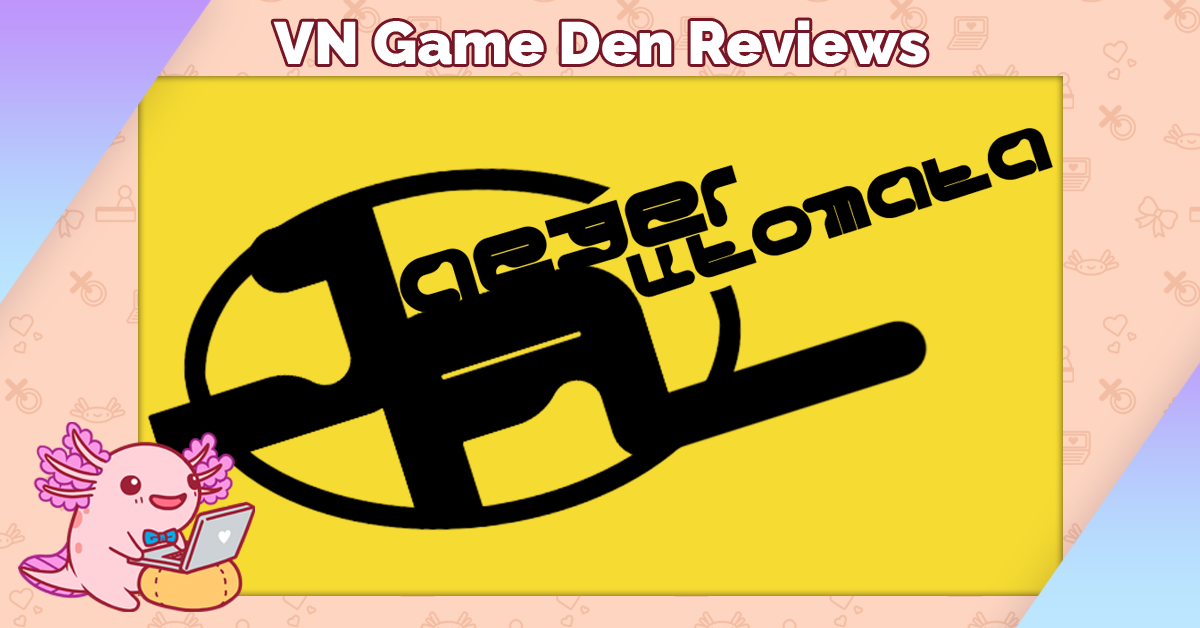 The premier game from jturne31, Jaeger Automata: Turquoise Requiem tells the story of Princess Turquoise, heir to the Azure Kingdom. When the terrorist organization Tartaglia threatens the safety of her homeland, she must gather a crew of friends and allies to take back the throne that belongs to her. Who can she trust to help her?

The premier game from jturne31, Jaeger Automata: Turquoise Requiem tells the story of Princess Turquoise, heir to the Azure Kingdom. When the terrorist organization Tartaglia threatens the safety of her homeland, she must gather a crew of friends and allies to take back the throne that belongs to her. Who can she trust to help her?

A review for this game was requested via the VN Game Den review request form.

When the game was submitted for review, it was described by the developer as being a demo. The game page describes it as in development, but I did reach a couple of “ending cards.” A couple of the choices were definitely not available. So, overall, it’s a little unclear exactly what level of completeness the game is at.

The game opens with a very dynamic title sequence, definitely setting a specific tone. Then, when it breaks into the game proper, you’re looking at a very peculiar style. When it comes to the sprites, it’s not a very naturally emotive style, but there is a level of higher, technically complicated implementation. There’re blinks, effects, movements, and cut-ins, all creating a lot of visual interest.

It’s an objectively strange style, but by no means bad. It’s all bulky proportions and a very jarring color palate. The backgrounds are very simplistic on the surface, but they glitch and animate, revealing a sense of magical realism. Despite not literally representing the environment the characters are in, the mood is definitely there. It’s easy to understand where everyone is and how they should be feeling and what’s intended to be conveyed to the player. The technical rendering of the art feels unfinished. If this is part of the demo aspect, then I would anticipate something a little cleaner for the full release. If it’s an intended part of the style, then I still think a little bit of polish wouldn’t go amiss, just to make the purposefulness of it clear. Altogether, the aesthetic has a little bit of Afrofuturism, a little bit of early-aughts “urban” art, and this scrim of delightful surrealism. So if it just felt a little more put together, it would be something completely different than anything else out there.

It also really needs to pull its writing together. It uses a very interesting text representational style that’s highly reminiscent of role-playing chatrooms, particularly in the way it describes the immediate actions of its characters. Combined with the more formal visual novel text presentation, it’s actually extremely interesting. It creates an even more off-the-cusp continuity of action that’s really very intriguing and very quick-moving.

But the story just isn’t there. It’s frenetic. I don’t know what the plot is. Things happen, but I don’t know why they’re happening or who these characters are or what they’re doing. If the intention is to have more story after this, I can see where the story has the ability to go. If this is somehow the complete story, then it really needs an overhaul before final release.

Overall, I like what the game is trying to be so far. It’s got a lot of cool little hints at some very high concept and interesting ideas. Even as a demo, though, it hasn’t really managed to execute on them. It’s a little haphazard, and it feels like it hasn’t been fully planned out. I feel a level of investment, though, in seeing the game pull itself together a little better. I want to know what this final product is going to look like because the seeds of good ideas are there and the bones of a really good structure are present.

Jaeger Automata has the spark of a really interesting game underneath, but needs time to find its feet before it can be a solid release that can compete with other games.

Check it out in its current state on itch.io.