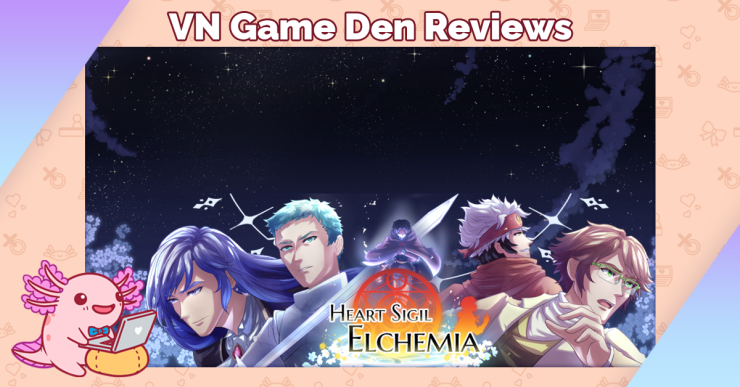 In the demo of this otome game, play as Risu, an alchemist who is trying to find out why elementals are turning into monsters!

Heart Sigil Elchemia is a fantasy otome game in development by ShibaList. Play as Risu, an alchemist who is trying to find out why elementals are turning into monsters in the city of Lavin. Working alongside four romanceable companions, she seeks a cure to end the madness.

A review was requested via the “Review My Visual Novel” form on the VN Game Den website. 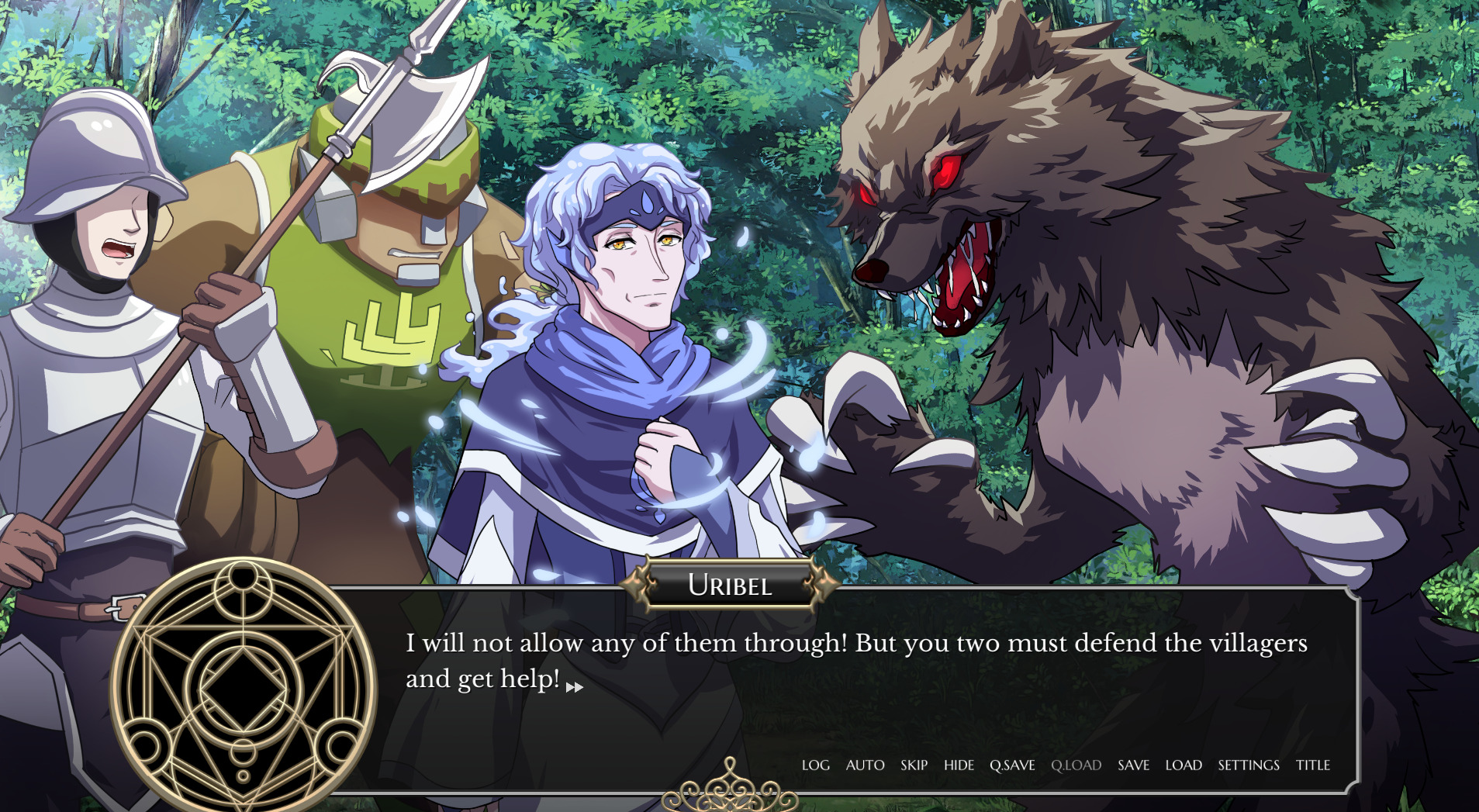 Heart Sigil Elchemia tells an interesting story full of mystery and intricate lore. It starts by following Uribel, a water spirit, as he tries to battle daimons and protect his town. This is a nice reference to ShibaList’s first game, Yrsa Major, which was released for the Otome Jam and which we had the pleasure of reviewing.

Eventually we meet Risu, the protagonist of the game, and her ishim, Eguze. I think the idea of alchemists having spirits that are bonded to them is infinitely fascinating, and I’m excited to see what more we can learn in the full version of the game!

The game sets the player up by placing them in the midst of a dangerous mystery—one that requires Risu’s intellect and strength alike. Risu is a refreshing protagonist because she’s strong willed and determined. She can protect herself, although having the option of four companions to rush in and fight alongside her is welcome! While Risu has to save the day, ShibaList is letting her find some love along the way! 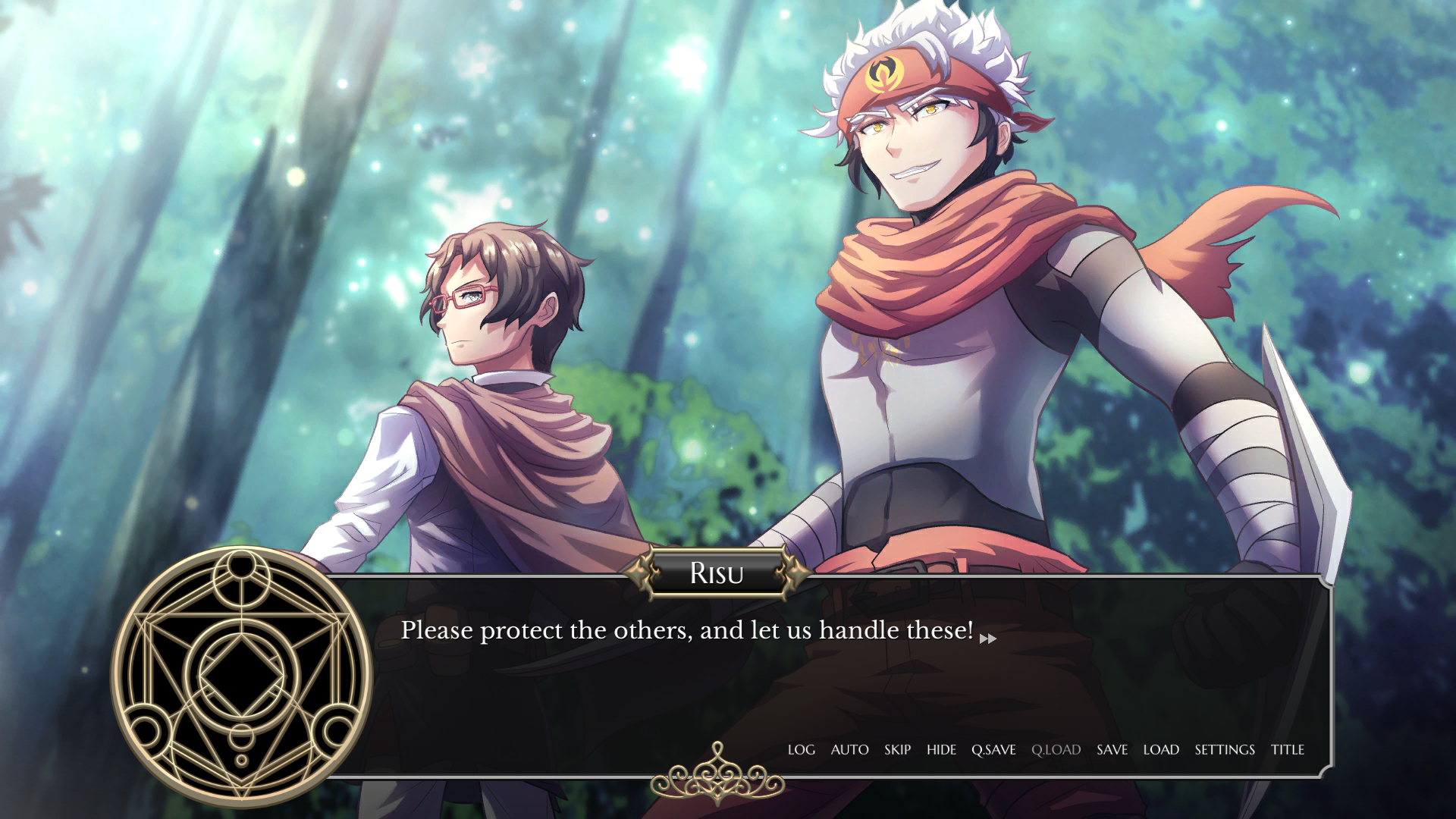 The backgrounds used are stock, meaning they aren’t unique to Heart Sigil Elchemia. Some scenes are generic enough, like walking through a forest, that nothing really fancy is needed. In fact, most of the backgrounds fit in well with the game’s environment, though seeing Lavin with unique and detailed backgrounds would enhance the player’s view of the game. This isn’t something that would warrant not giving the game a shot, however.

Heart Sigil Elchemia’s sprite and CG art more than make up for the backgrounds. Each character’s design is well thought out, showcasing both their style and personality. With various expressions, the game feels immersive and alive. By far the shining star, aside from the game’s lore, is the amount of CGs!

CGs are great for showing players exactly what characters are doing in a particular scene and often showcase different angles than simple sprite work can maintain. In Heart Sigil Elchemia, the CGs act as a way to present more of the world’s lore through scenes like rushing into battle.

The music in the game fits within each scene pretty nicely. My only gripe is that the tracks change quite frequently, even in the middle of scenes, jumping back and forth. It felt a little jarring and slightly overwhelming as I tried to ascertain the tone and feeling of each scene. 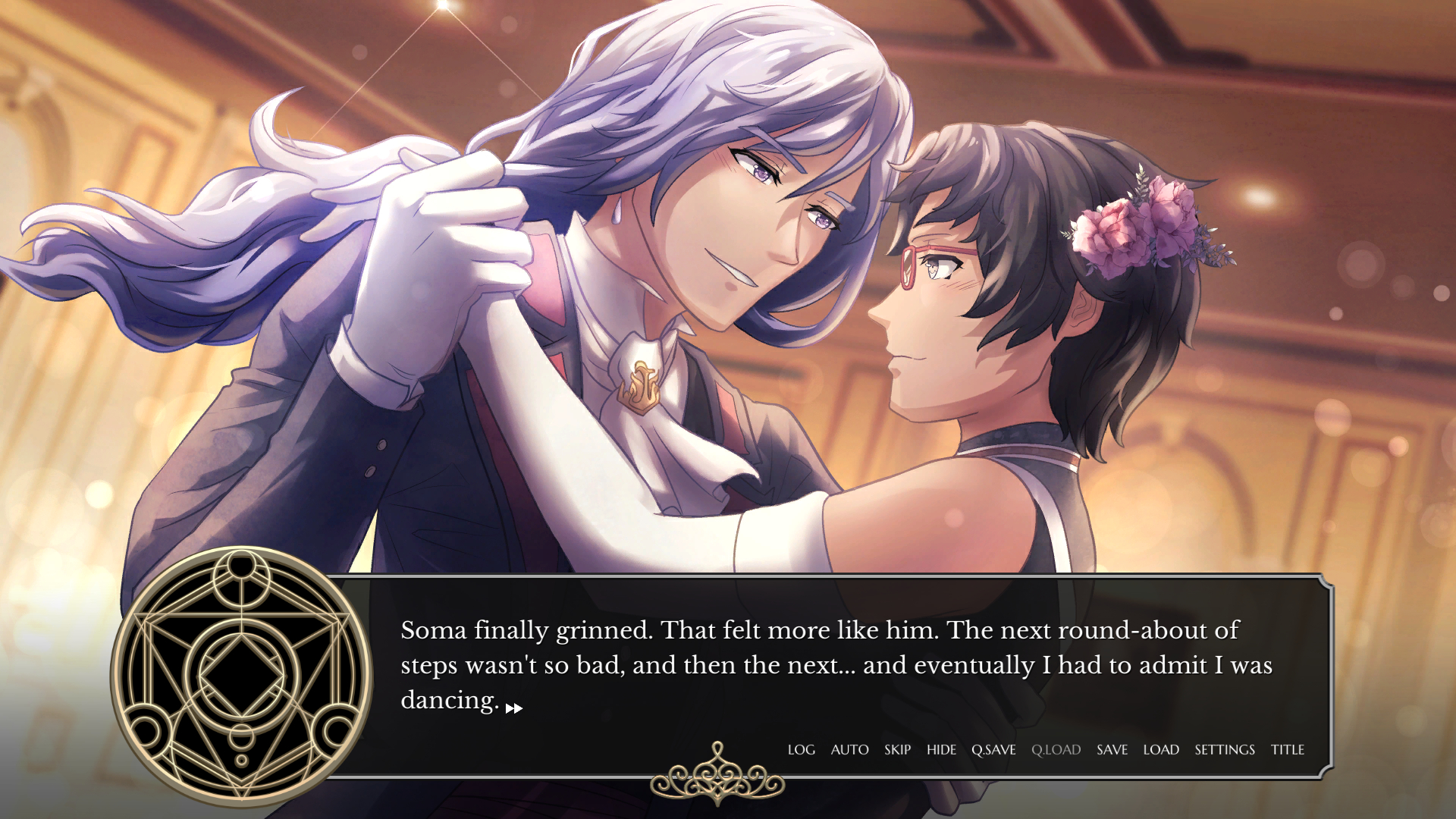 If you’re interested in fantasy games, I think the demo of Heart Sigil Elchemia is worth downloading. With 12,000 words and a preview of all four romance routes, there’s plenty of content to dive into.

You can play the demo for yourself on itch.io.