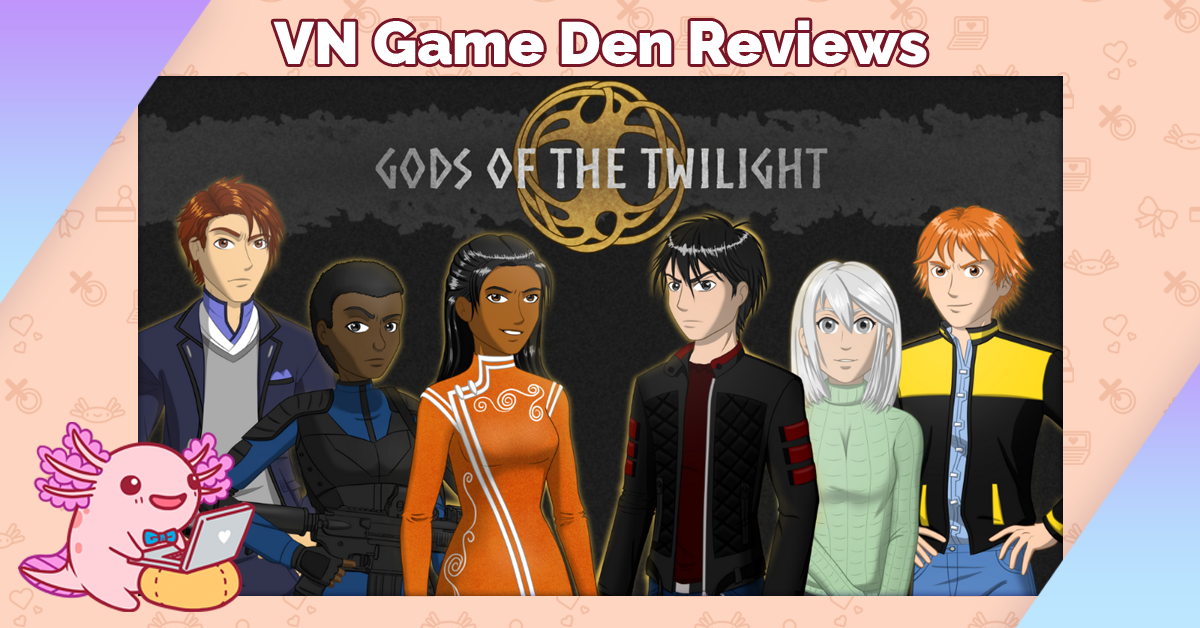 Demo Review: Gods of the Twilight

Set in a dystopian near-future, Gods of the Twilight follows two protagonists who find themselves caught up in the impending start of Ragnarök.
Check out our thoughts on the demo!

VN Game Den received a request to review the Gods of the Twilight demo.

Gods of the Twilight is an upcoming visual novel dealing with Norse mythology in an urban fantasy setting, and a free demo is available now. It is set in the near future, where things are not completely science fiction yet but more advanced than the technology we currently have—unfortunately, it’s also a dystopia. Things in the world are pretty bad, and getting worse all the time, thanks to the unusually long winters making survival even more difficult.

At the start of the game, you pick between one of two characters, both of whom are living on the artificial island of New Reykjavik. You can play as Althea, a young woman who loves research and is studying there along with her friends, or Farkas, an introverted young man who seems to have a knack for finding trouble. Who you choose doesn’t particularly matter, because once you finish that character’s introductory chapter, you’ll start the other character’s chapter afterwards. The introductions to their stories are all that the current demo contains, but the style suggests the full visual novel will alternate between the two characters.

Both characters are interesting, although very different in terms of personality. Their chapters are also quite different from one another. Althea’s is the more interesting of the two, because it veers into strange and exciting territory very quickly. After talking to her friends, Althea notices that the strange weather conditions oddly line up with the prophecies about Ragnarök, the great battle from Norse mythology. Of course, she dismisses it as probably being a coincidence, but soon things take an even more dangerous turn as a deadly pursuer attacks her.

Her story also has slightly more branching, with a choice partway through that determines where she is when the mysterious assailant arrives. Events still play out largely the same way, conveying the same information to the player and ending the chapter in the same place, but there is a significant difference that suggests these choices could lead to important changes later down the line. Meanwhile, the choices in Farkas’ chapter don’t seem to change much at all, but his story also has a much slower beginning.

Instead of diving into Ragnarök and threats immediately, Farkas’ story feels more personal at the start. He seems to have gotten into a fight the previous night, but he has no memory of it. It briefly introduces us to a friend of his that he distanced himself from, before Farkas has an encounter with a young man named Hector, who is trying his hardest to be a hero and make the world a better place—even though he can’t hold his own in a fight. Farkas ends up helping Hector out, and while I’m definitely interested in seeing Farkas develop as a character, this half of the demo has a much different tone than Althea’s as a result. It will be interesting to see how the two stories develop in the full game.

Gods of the Twilight will be an episodic release, with the full story told across at least three volumes. However, the first volume is planned to feature 10 to 15 hours of content on its own. Choices will carry over between volumes, and there will be both multiple endings to the story and optional romances for each protagonist to pursue. And, of course, the full release will deal more with Norse mythology, the Norse gods, and the protagonists’ connections to them.

In the meantime, you can download the demo for Gods of the Twilight from Steam or itch.io.