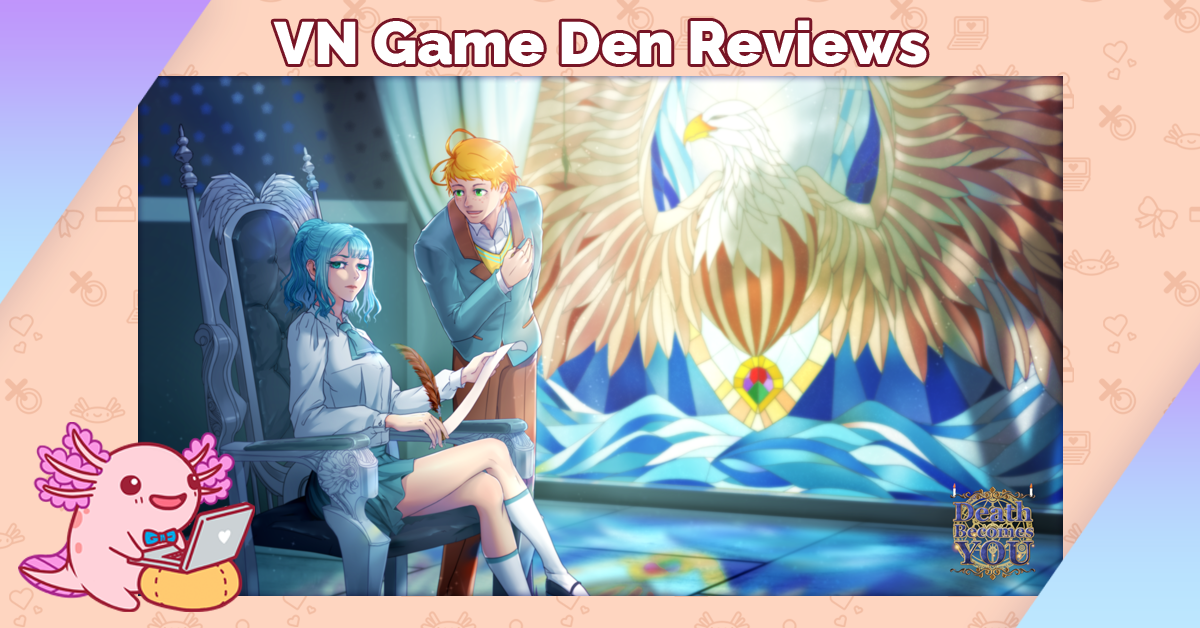 After a personal altercation, you find your best friend the victim of a grisly death, presumably murder. When four suspicious students arrive and immediately start pinning the blame on you, you know you have to solve this on your own. As you investigate, you discover that the friend you thought you knew so well might have had a more complex personal life than you thought.

Quill Studios brings us the demo for Death Becomes You, a murder mystery set in a magical university. After a personal altercation, you find your best friend the victim of a grisly death, presumably murder. When four suspicious students arrive and immediately start pinning the blame on you, you know you have to solve this on your own. As you investigate, you discover that the friend you thought you knew so well might have had a more complex personal life than you thought. What secrets was she keeping from you? How did her life intertwine so tightly with these new, strange classmates?

The demo currently contains the introduction and part of one of the main routes. A review for this game was requested through the VN Game Den review request form.

The art is an interesting blend of what one might expect from “traditional” visual novel art and a unique design. Big eyes, multi-chromatic hair, and generally sweet features and designs belie a darker, deadlier story underneath. All the backgrounds are lovely and crisp, and the entire design drips with elegance. There are a few places in the rendering of the sprites in particular, though, where from a technical perspective, there’s an offness to them or a slight inconsistency between characters. And while the CGs have a wonderful scenic quality and the main character’s sprite is very emotive, the other characters can feel a little emotionally flat. Overall, however, it’s very pleasant to look at, and the contrast between aesthetic and content is a lot of fun.

At first, I feel like I didn’t really have a good grasp on the relationship between the main character (whose default name is “Sidney”) and Lyra before the worst happened. As the game progresses, however, this vague background ends up playing extraordinarily well into the mystery surrounding Lyra’s death. We not only find out at the same time as Sidney new things about Lyra, but also get a postmortem perspective on their relationship just from Sidney’s perspective. It leads the reader to wonder whether Sidney really knew Lyra. It also seems to shift the focus away from Lyra herself and onto Sidney’s version of Lyra in her head, which has an interesting stagnant quality to it. Lyra becomes a moment frozen in time rather than a living person, and that creates an interesting intersection with the fact that she’s now dead.

One thing that I still think struggles a little even at this stage of the demo is really understanding the character motivations. Some of their first interactions are a little bit strange, and I feel like I don’t really have an adequate understanding of why they’ve decided to act the way they did. If they genuinely thought Sidney was the murderer, why not call the authorities? If they were trying to frame Sidney, why not still call the authorities? Why make themselves culpable in this murder? Now, part of the game is getting to know the characters and learning their motivations, but I’m not sure anything our main character has turned up so far feels all that convincing as murderous intention. The characters definitely reveal themselves as complex and nuanced and just a little villainous, but there are some logic jumps I just feel like I’m not quite taking.

What I think this game does extraordinarily well, though, is the subtle approach to its worldbuilding. I’m not totally sure on the exact mechanics of their magic system at this stage, but it doesn’t really tank the narrative experience. They just sort of use the magic in a practical way, showing its day-to-day function, and it’s very easy to draw your own understanding without feeling like your hand is being held. It’s elegant and organic and lays a great framework for the overall mystery of the story.

Death Becomes You is creepy and mysterious, and while magic exists, it’s the young women themselves that are the source of this very real danger. You’re constantly asking yourself: What are they capable of? What are they willing to do? Who really was Lyra? And, ultimately, how do these all connect to what happened to her?

Get the demo now on itch.io.