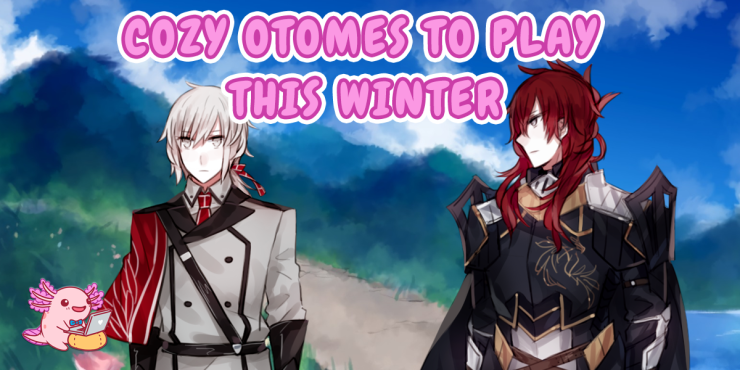 These are 5 otome games that will make you feel cozy this winter!

The year flew by and now winter is finally here, and what better way to spend it than in otome land? These are a handful of charming romance games that are perfect to bundle up with this season!

Code: Realize ~Wintertide Miracles~ was released in the USA in February 2019. This is the third chapter in the Code: Realize series featuring beloved heroine Cardia Beckford and the dazzlingly handsome characters of the Steel City. The best part is, you get to see all of them in their fabulous winter wear. What’s unique about this game is that you can go on a date with two guys at once, just in case one isn’t enough to satisfy you.

Aside from the above, if you haven’t played the series yet, then you’ll want to catch up before you start on this seasonal release. These dashing boys will surely make your heart flutter, and the mystery Cardia unravels will surely keep you entertained. This series does not disappoint; they really set the stage for what is to be expected from a romance visual novel. The well-rounded characters, unique plot, and gorgeous artwork in this game are the perfect recipe for a cozy winter romance game, and it’s no surprise Code: Realize delivers just what we need.

Love & Legends kicks off in modern-day Chicago. You play as a nameable MC casually headed to the movies to watch the latest romance movie with your best friend. Things take a sudden turn, and a strike of lightning blasts you back into medieval times. You stand out in your 21st-century street clothes against a backdrop of castles, knights, elves, and magic. To top things off, the people in this strange world accuse you of being the evil Witch Queen! This story dives right into the action; it’s a sweet and simple story featuring the good vs. evil concept. If you’re a fan of isekai stories, where the protagonist is transported into another world, then this tale of adventure might be up your alley.

This game is available via the Lovestruck app with freemium mechanics. If you’re not familiar with Lovestruck, it is Voltage Inc’s selection of stories by their US division. What I appreciate about the stories on there is that they feature heroines with a little bit of moxie to them, as well as diverse love interests.

Winter feels like the perfect time of year to kick back and read fairy tales. Cinderella Phenomenon is a magical otome game following Princess Lucette, also known as the Ice Princess due to her stone-cold nature. This “Cinderella” isn’t so sweet, and as punishment, her lavish life is turned upside down by the hands of a powerful witch. Now at the mercy of the Fairytale Curse, she must do three good deeds in order to reclaim her title, or else she’ll be trapped in a crownless life.

The story is a retelling of classic fairytales, but with a surprising twist. What also stands out the most to me in this game is how distinct the heroine is. The Ice Princess Lucette isn’t your typical benevolent princess; she’s flawed, and that’s what drives the story. This game is free, but it’s certainly up to par with commercial releases. You can support the developers by purchasing the sequel fandisc, Cinderella Phenomenon Evermore.

Magical Otoge Ciel is a fantasy otome game following the life of a princess named Ciel. Like Rapunzel trapped in her tower, Ciel has only known the confines of her castle. She dreams of seeing the world, and with the help of her loyal bodyguard Florien, her dreams are soon a reality. But Anton, the captain of the royal knights and Florien’s older brother, might just intervene in their escape plan.

The Magical Otoge stories are some of the most beautiful games I’ve ever had the pleasure of playing. The music and artwork really transport you into a fantasy world, and I really value that kind of immersive experience. It’s simple, wholesome, and everything you need for a cozy romance this winter.

Mystic Messenger is one of the most immersive otome games available right now. You are guided through the story through a series of chat messages and phone calls, all of which happen in real-time. That’s right, you get to text with the love interests throughout the day! There’s a set schedule of phone calls as well, so make sure you don’t miss them because you will painfully regret it! Cheritz is a South Korean otome studio, so the swoon-worthy phone calls you receive are in Korean, but don’t worry if you don’t know the language, because the English subtitles and translations are well done. I would very much look forward to an English dub of these phone calls should they decide to localize this game more.

This game has a wildly fun and fantastical plot drives you into the mysterious “RFA” organization with a handful of love interests. Gameplay-wise, this has to be the most impressive otome dating sim I’ve ever played. The real-time chatting and calls make the game feel incredibly authentic. This is the game that opened my eyes to how amazing dating sims can be.