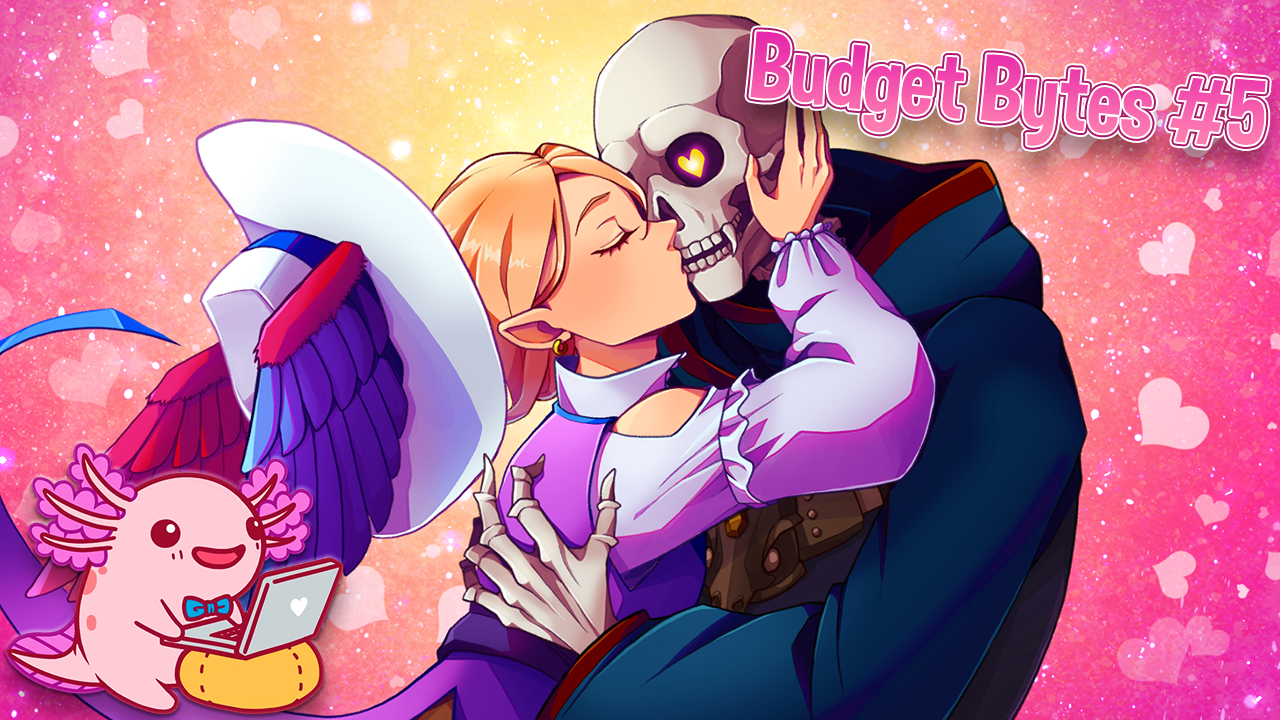 Welcome to September’s edition of Budget Bytes, a monthly series where I recommend you games that cost $10 or less!

Welcome to the new installment of Budget Bytes, where I recommend you games that cost $10 or less. Let’s get into the titles for this month!

SLASHER, Interrupted is a neat little game about the telling of a campfire story. You play as Emily, whose name is changeable. All she’s trying to do is tell a spooky story at the campfire. However, just as she’s getting to the good parts, her three girlfriends interrupt her, predicting what will happen next.

The choices in this game come down to whose interpretation of the story you’ll tell. Will you tell the cute story that Ellie wants? Maybe something comedic and chill for Rosie? Or will you tell the horror story you originally intended to tell for Caroline’s enjoyment? It’s up to you. You can do a mixture of all three or create a story with one of the characters in mind.

I really enjoyed the writing. The way Emily tells her stories, no matter how she tells it, is great. It really comes off as someone telling you a campfire story, with all the details she puts in. The dynamic between the entire cast is great too. They poke fun at one another and make comments about the direction the story is going. However, I do wish we got more dialogue from Emily. Outside of storytelling, she doesn’t say much.

SLASHER, Interrupted is really short. It took me less than ten minutes to complete my first run of the game. However, there is a lot of replayability, trying to do different combinations of the story to see how it unfolds. Plus, the game is cheaper than a cup of coffee. I highly recommend checking out SLASHER, Interrupted if you’re looking for something cute, and maybe even a little spooky, to play.

You play as Robin, who is a part of a group that plays “Wizards and Wyverns,” a tabletop role-playing game very much like Dungeons and Dragons. The game starts up with her making her character and having the game explained to her by Subin, a young woman Robin has a crush on. Then the game fast forwards six months, where we’re now at the end of Robin and her group’s campaign, facing the final challenger, Vulcuzar, Lord of Crawling Bone. With all your friends locked in cages, it’s all up to you, the most dashing bard the land has ever seen, to save the day by…flirting with Vulcuzar!

Throughout the game, you have to make the correct choices that will get Vulcuzar to fall in love with you, and in order to do that, you really need to get to know him. You do this when you go inside his mind and begin to learn about his life, his friends, and his favorite things. Learning what’s important to Vulcuzar is the key to winning his heart, and ultimately Subin’s heart, if you manage to do everything correctly.

I really enjoyed the comedic writing in this game. If you’ve ever played a tabletop game, you know that the games can get chaotic pretty quickly, especially in something like Dungeons and Dragons where the story will develop based on your actions. Seeing the cast react to Robin as she tries her best to flirt with the evil lord is fantastic.

The game is also really cute at times as well, especially when you come back to reality and interact with Robin’s friends. You learn how much she is infatuated with Subin and you can’t help but root for her, hoping that she gets the girl at the end.

The game’s soundtrack is amazing as well, and you really feel like you’re in an RPG battle.

Bard Harder! is a tough game to pass up, especially when it’s only $1.99. It’s hard to find a quality game for that cheap anywhere else. So, I recommend giving this game a try and seeing if you can woo over Vulcuzar.

For more information, you can also read our review of Bard Harder!.

LiveScream has you controlling a livestreamer whose niche is covering the supernatural and anything spooky. However, they’ve decided to step up from covering stories and videos by going to a supposedly haunted house, capturing every moment online for their viewers to see. The story says that the family who used to live in that house has disappeared, from their teenage daughter to the reclusive parents. What could have possibly happened? It’s your job to find out!

In the game, you explore and examine different parts of the house in hopes of not only piecing together the story of what happened to the family but also having an entertaining stream. This is where the choices come into play. In the game, there are two gauges you have to keep a watchful eye on: Fear and Audience Rating. If you get too scared, you will end up running out of the house and making a complete fool out of yourself. However, have too low of an audience rating and your viewers will get bored—and they’ll make you fully aware of that.

I really dig the customization options in the game. When you start up, you are given a few options to choose from: your intro, name, username, the name of your fanbase, your skin tone, and your pronouns. While these choices don’t heavily impact the game, it’s small details like this that help make someone feel more immersed in the game and like they’re actually in this scenario.

Another thing I like is the writing. Developer Lightning Rod Games did a good job at building up the mystery as well as perfectly capturing what a livestream chat is like.

My one minor complaint is that there is a lot of re-examining you have to do. That isn’t a bad thing at first; you do this a lot in horror games and point-and-click titles. But in those games, you get a bit of direction on what to do next. I think the game would have benefited from doing something like that so the player’s not going back to every room, clicking on something, and hoping that a new event will occur. Let me give you an example of what I mean. Let’s say you examine the cupboard in the kitchen, and while in the process of doing that, the dialogue starts saying there are noises coming from the living room. That would give the player a clear idea of where to check next.

Overall, I think LiveScream is a good horror/comedy visual novel that will tickle anyone’s need to go into a haunted house.

The final game we’ll be featuring today is a standout entry from last year’s Spooktober, radio.Signal. You play as someone who finds themself in a building, unsure of what’s going on. A voice from a radio tells you that they know the ins and outs of the place, and all you have to do is trust them and follow their every order. As you navigate through the area, things slowly begin to unravel, and questions about who is on the other end of that radio arise. Should you trust them or not?

David Acosta, the voice actor behind the man on the radio, does an excellent job at elevating the story with his performance. The character sometimes comes off as nice—even charming at times—because, at the start, you get the sense that he wants to help you. However, as time goes on, Acosta does a great job at turning the dial and making the player feel uneasy with his change in tone.

I thought the writing was pretty great as well. In particular, I loved the radio man. Despite his personality slowly changing as you play, you can’t help but rely on him. After all, you’re in an unknown building shrouded in darkness and he’s your only guide, so you feel inclined to trust him.

Continuing on with the writing, while the story has been done before and you can most likely predict where it’s heading right around the mid-way point, the tale developer Via has to tell is executed nicely.

If you haven’t had the chance to play radio.Signal, I highly recommend that you do so.