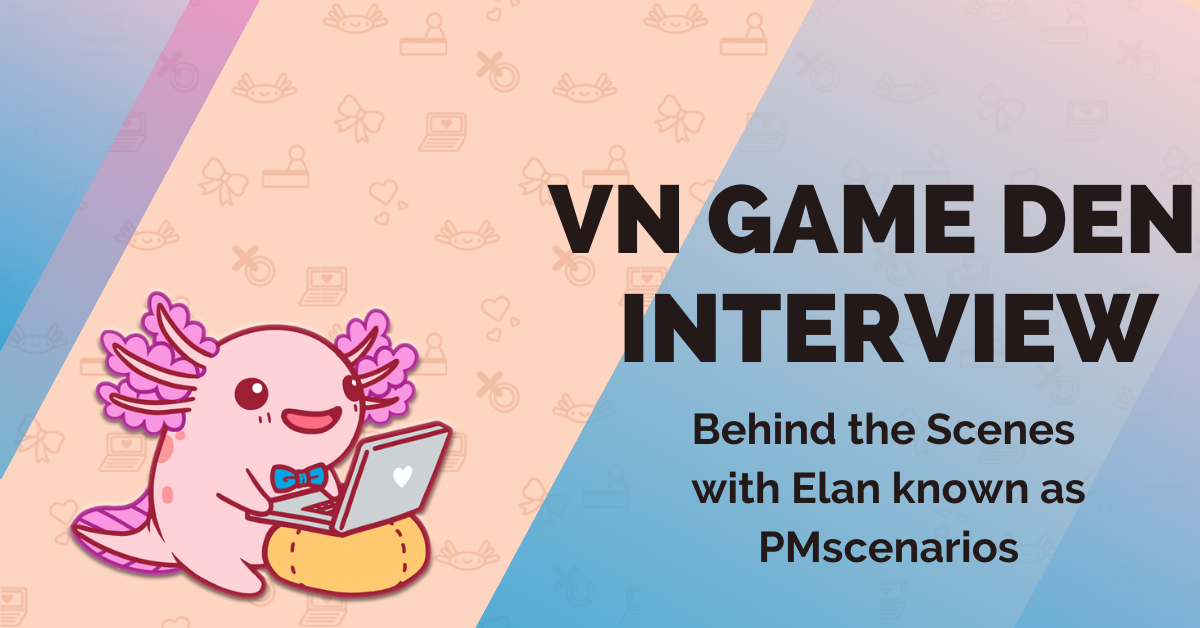 Behind the Scenes with PMscenarios

We sat down with PMscenarios to talk about their appreciation of visual novels, their creative journey, and what’s to come in the future!

Elan, also known as PMscenarios, is a game developer, voice director, and editor. You may have seen their name on several projects including Whale’s Waldo, As We Know It, Night of the Lesbian Vampires and most recently In Blood.

We sat down with Elan to talk about their appreciation of visual novels, their creative journey, and what’s to come in the future!

Currently you’re working with Jaime Scribbles Games in a multitude of roles. What’s your favorite to perform and why?

Jaime and I have been working together for a few years now. I got to know her when she was starting to plot out As We Know It, and was able to collaborate with her as an editor and world builder on that. That laid the foundation for our current partnership and how well we get along now. While Jaime does all the actual writing and programming, like most small indie teams we both wear a lot of different hats at times. That makes it difficult to separate the roles into a favorite, but I really enjoy following a game from the inception as a loose idea to a functioning reality.

I am also very fond of the voice directing aspect. I really wanted to be a director before I got sick (I am disabled), and working with the voice actors to make the characters come alive for the demo was a uniquely rewarding experience.

Even though it will be a lot of work, I am excited to really get into it and knuckle down with the VAs for the full game in the next few months.

Night of the Lesbian Vampires was made in only a month for the Spooktober VN Jam. What’s it like trying to create a game in such a short amount of time?

Every game jam I’ve done has been challenging, but also very gratifying, and I’ve learned a lot each time. The most important thing during a game jam, I think, is to have clear time frames and be willing to let go of elements if the time is running out.

To finish voice acting for the full game in time for release we recorded parts of the script as it was finalized, and held meetings with the voice actors to go through the script and directions beforehand, to cut down on re-recordings.

I also want to give a huge shout out to FirahFabe who not only composed the soundtrack for NLV, but also edited all the voice lines. Firahfabe was always available and put in a huge amount of work to get the lines edited the moment they were ready.

Can you tell us a little bit about your creative journey up until this point?

My whole life I have had that desperate need to be creative and tell my own stories, but have always struggled with my energy levels because of my chronic illness. Game jams gave me that push to try to create something within a set time frame. But as I said earlier, it hasn’t always worked out. My first game is still just a demo.

My second game jam; Whale’s Waldo, a NaNoRen0 2018 project I made with among others Bob Conway and CrouchingBacon, I’m very proud of, because it was my first finished project and writing I had done in a long time. On the other hand Xenopathy, the Yaoi Game Jam project I made with Bob and SoulSoftEA, is not completed because I didn’t manage to finish my writing. I still feel guilty for letting down my partners and leaving the story untold. And I’m still sitting on over 10k of script that needs me to continue.

Working with Jaime as a story consultant, collaborator and editor means the finishing is not on me, while I can still be involved and feel creative. We also push each other in positive ways – I am a perfectionist and nitpick everything, while Jaime is all about being done. She will finish come hell or high water. 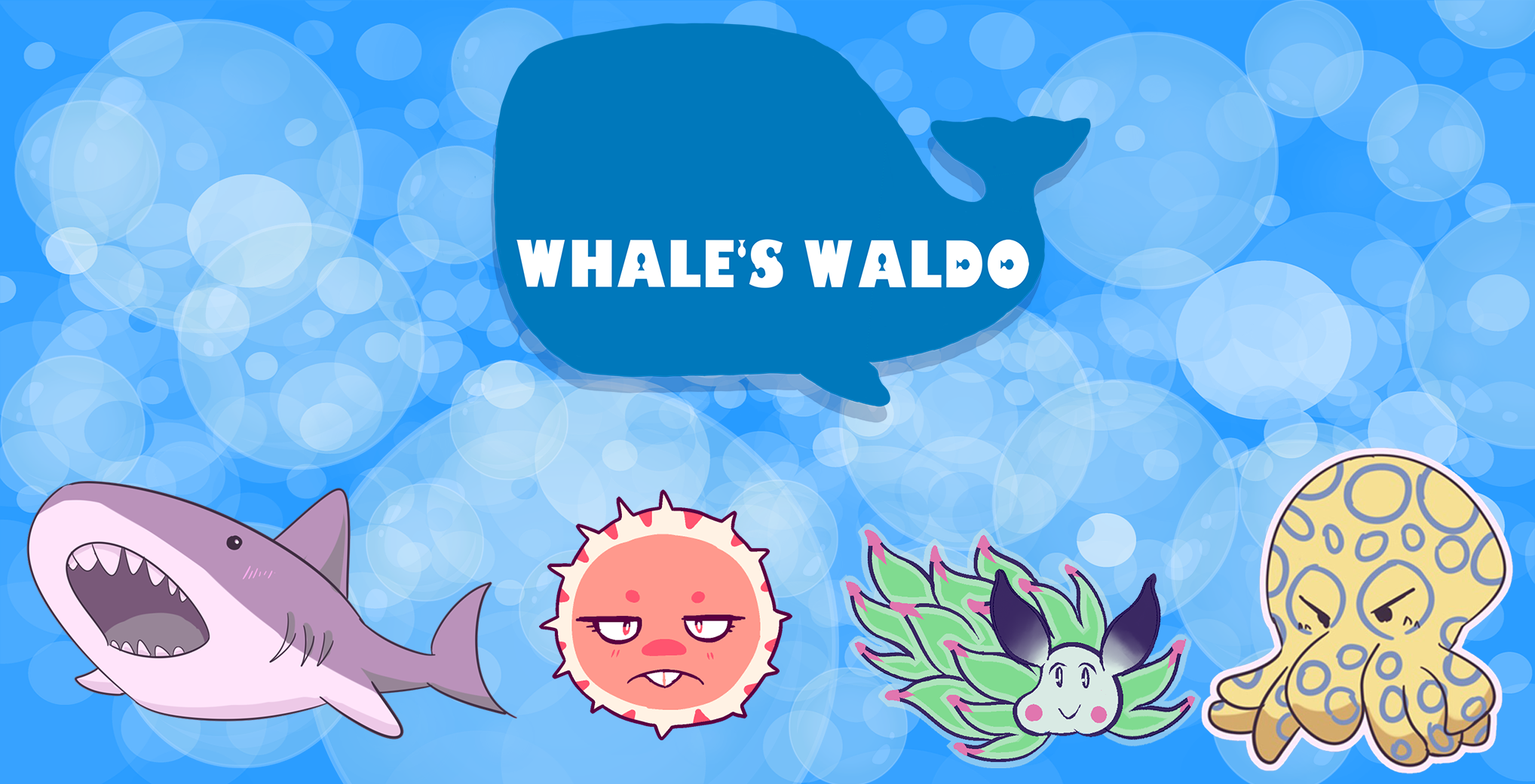 What drew you to visual novels as a medium?

I have always been into storydriven games. Adventure games were my foray into gaming, and still top my favourites list. That led me to Phoenix Wright and Hotel Dusk on the DS, which were my first VNs. But Obscurasoft’s Coming Out on Top was the catalyst for me wanting to make my own game. The way it balanced story, gameplay and erotic content really inspired me, and led me to play every other BL I could find, in addition to want to make my own. As I got involved in the VN community and got to know more devs I also played and became familiar with the other genres of VNs, and now of course work on an otome. BL games are still very close to my heart though.

Of what you’ve accomplished up to date, what are you most proud of in your visual novel development career?

As I mentioned Whale’s Waldo’s completion really gave me that boost as a dev that – I can do this. I am also really proud of As We Know It. It is the first commercial project I have my name on as a dev, and sci-fi is personally closest to my heart. World building is my first love, so the kind of background work I can do for games like AWKI and Xenopathy really challenge my creative muscles in a rewarding way.” 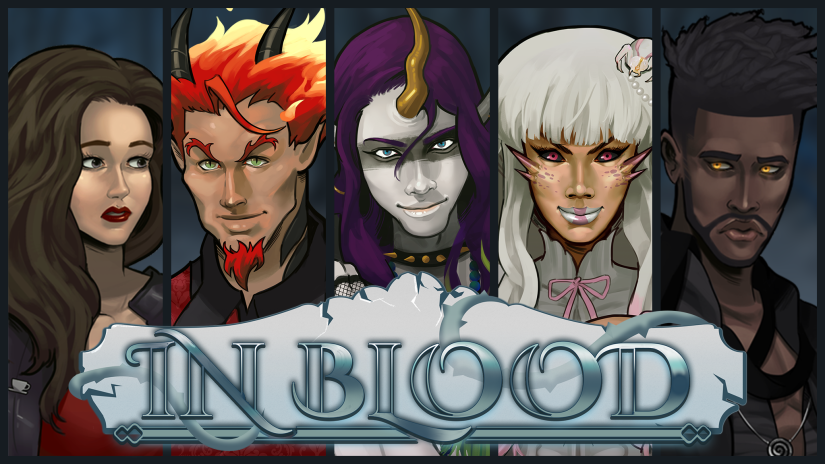 Do you have any advice for people wanting to get into VN development in any capacity?

Start small. …Smaller. Even smaller. Scope creep is your biggest enemy, and from my own hard-earned knowledge; when you don’t have the experience, it’s very easy to plan too big. You can make your dream game, but you will love it much more if you have done the experimentation beforehand. My first game I did not finish and do not even show on my dev profile anymore. But I participated in several game jams, increased my knowledge of both renpy and game dev and am now working on In Blood.

Even if you don’t know what you can contribute to a game jam group, you can help market, help beta read – just poke your toe in and ask around. Most jams have a discord set up with group recruitment. Working with others will also give you invaluable experience for when you’re trying to manage your own game.

Are you currently working on any upcoming projects that you can talk about? If so, we’d love to find out what VN fans can look forward to.

Well, at the moment we’re all pistons firing on editing In Blood. Brenton’s path is almost finished and will soon be alpha tested by our backers before we move on to voice acting. We’re hoping to release at the end of the year, so follow @WafflesRtheBest on twitter for up to date info on the game and try the demo if you haven’t. We promise laughs, tears and screams when you get to experience the full story.

You can stay up to date with PMscenarios on their Twitter and check out the projects they’ve worked on here.