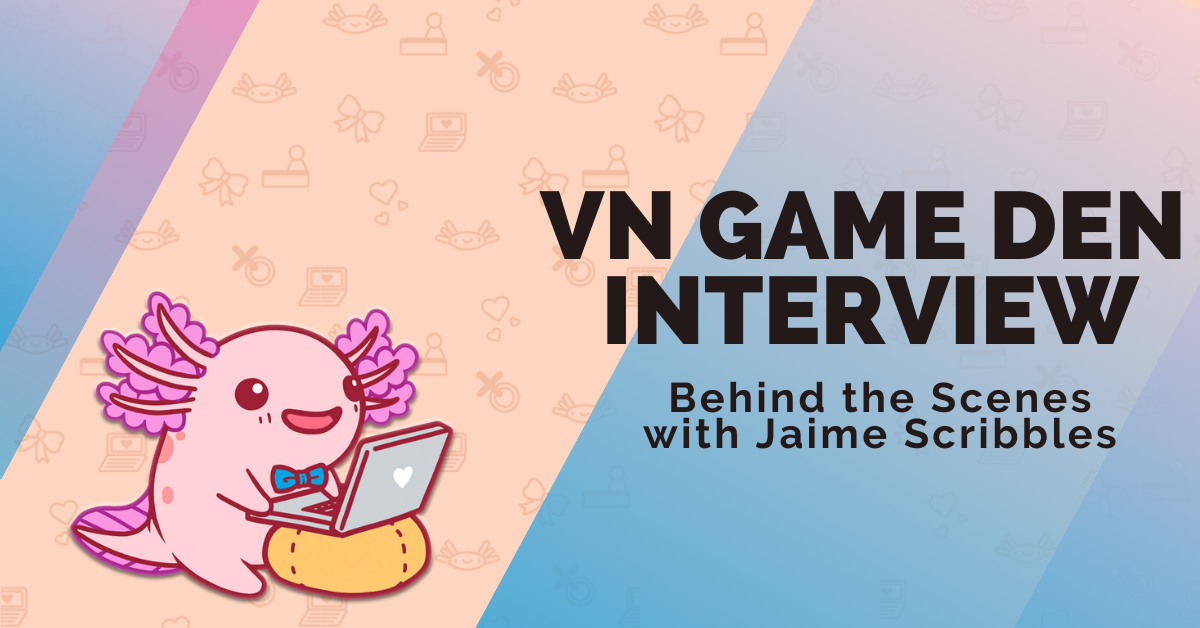 Behind the Scenes with Jaime Scribbles

In this “Behind the Scenes” interview, we sat down with Jaime of Jaime Scribbles Games to discuss her start making visual novels, how she’s grown since then, and her newest in development visual novel, In Blood.

Jaime Scribbles Games is a visual novel studio started in 2016 that focuses on dark and mature stories. From horror games like Pinewood Island to apocalyptic adventures like As We Know It, players will be sure to find a gripping romance tale to indulge themselves. You can check out our reviews of two of Jaime’s games:  In Blood and Night of the Lesbian Vampires.

Jaime is the owner, writer, programmer, and lead developer of Jaime Scribbles Games. We got to sit down with her to discuss her start making visual novels, how she’s grown since then, and her newest visual novel that’s in development, In Blood. 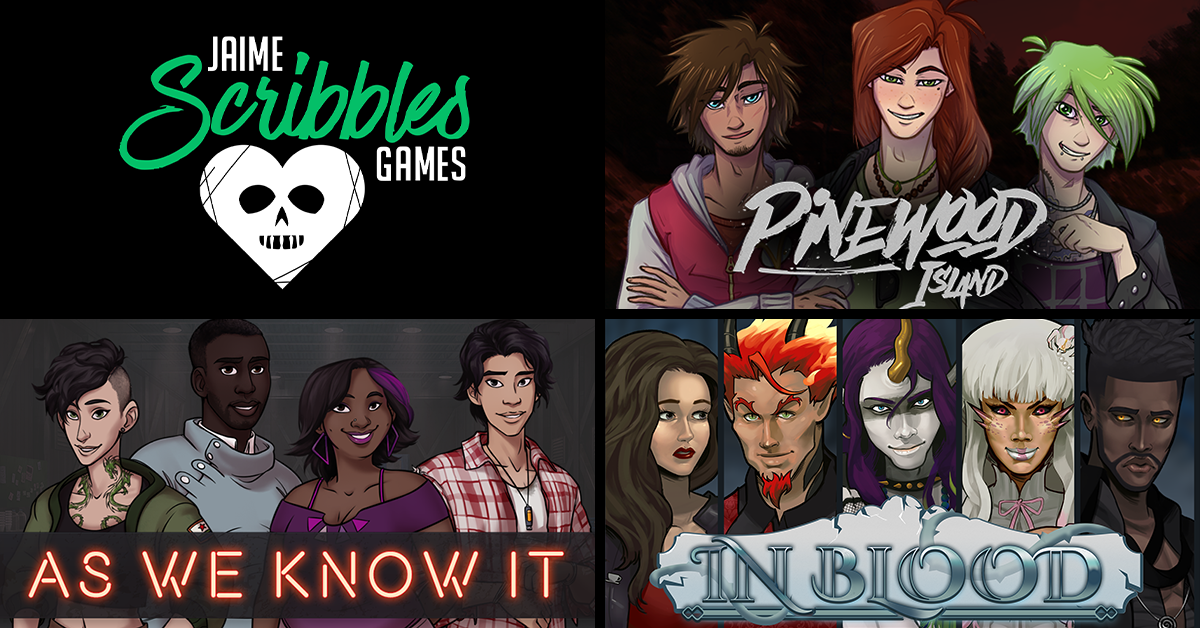 How and why did you find yourself making visual novels?

The first time I played a visual novel it was like the sky parted and my brain went “AH HA!”. I was struggling to write traditional novels at the time and feeling very bored with it. I had tried graphic novel scripts but there were similar issues there. Once I knew that visual novels and interactive fiction were ‘a thing’ I knew that was where I wanted to go creatively. It felt like a genre made specifically for me.

You’ve worked on a lot of horror romance VNs. What inspired your choice for that genre?

I love horror, and I love romance, and so I love when they get mashed together. It isn’t the most common genre mash-up since they tend to be at war with one another, but when done right I think the effect is really beautiful. Horror gives an excellent backdrop for exploring more dangerous romances with villains and morally gray characters. It’s truly a match made in hell.

What have you learned from making Pinewood Island, your first title, and how has that helped you with your newer games?

I learn so much with every game that I work on. Between Pinewood Island and As We Know It, I taught myself programming basics and player agency concepts. Past that I learned a lot about play styles, mechanics, and narrative design just from watching people play or from getting their feedback. I know more of what players want and expect and am getting better at giving it to them. 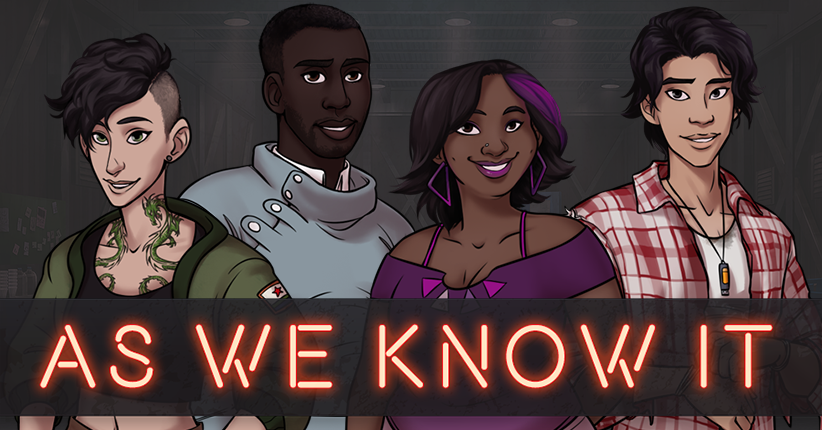 Among the several games you’ve already released, was there a favorite that you worked on? Why?

Right now In Blood is my favorite. It’s everything I’ve ever wanted to make, and see in the ‘otome’ space. Mature story, problematic characters, sexual content, Horror & Romance, and more. I love the gothic romance genre, and I love the cast of characters I’ve created. It’s been really fun to work with a foul-mouthed and badass heroine like Ellie. I know the game is not going to be everyone’s cup of tea, but for people who crave darker content (like myself), they’ll be really pleased.

Is there anything you’d go back and change about your older releases (Pinewood Island and As We Know It) if you could?

There are tons of things I would do differently if I made either of those games today. I’d spend a lot more time on the endings, and sex scenes for example. (As We Know It didn’t have any sex scenes, I would have put them in). In general I don’t believe in looking back. Perfection isn’t something worth chasing. With each project I learn how to do better the next time, and without screwing up I’d never gain that insight.

You have quite a few GUI Assets/Packs that have been released on itch.io for the public to use. What inspired you to do this for the community?

I really enjoy programming GUI into ren’py, but I know a lot of people hate it. Making the GUI assets was a fun exercise since it uses a different part of my brain. If I was overwhelmed with other stuff I could do the GUI to relax. I figured it couldn’t hurt to start selling the kits for people who didn’t want to bother with all that stuff. The money helps fund my other projects.

In Blood was successfully crowdfunded on Kickstarter. With its release getting closer and closer, how do you feel?

It’s been a long and wild ride. We have been so busy getting art and audio assets made while also working on draft revisions. We’ve beta’d one of our routes and got some amazing feedback from our backers.

We’ve got a lot of work done, and there’s still a lot of work left to do. I am mainly feeling very busy and tired. Everyone has been amazing and I really appreciate their support, so I don’t want to let them down. 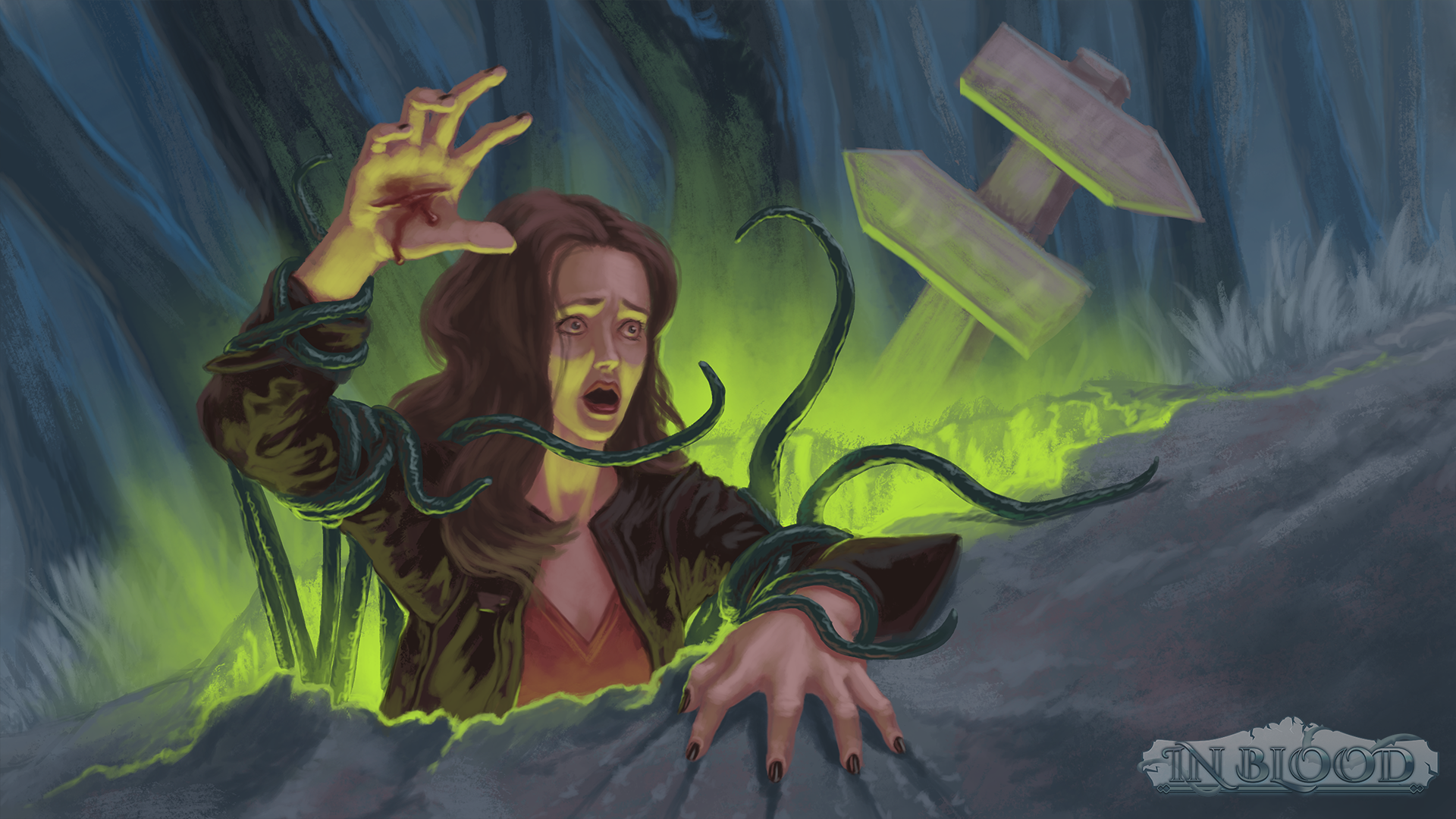 Can you tell our readers what In Blood is about?

You play as Ellie who accidentally makes a blood pact with an ancient forgotten god. She’s then transported to Myyr, a swamp dimension populated by others who fell into the same fate as her. Ellie is then stuck in the very difficult position of navigating a dangerous world while having to trust one of the inhabitants to help her escape.

In Blood is about falling in love and trying not to lose yourself in the process. Both escaping and getting to know her love interest comes with dangers the player must overcome for Ellie to survive. There are a ton of endings to unlock, deaths to avoid, and even some happily ever afters.

What inspired the premise of the game?

I knew I wanted to do something horror-related after As We Know It, and after watching Shape Of Water I wanted to do something with monsters. Playing Demonheart inspired me a lot with tone and with the personality matrix. I bounced around a lot of different ideas for a while before settling on what you see now in In Blood. Accidental blood-pact with an ancient being gone wrong, being transported to another dimension with (kissable) monsters, and a chance to explore more problematic and mature relationships.

Can you tease anything about In Blood for our viewers?

Every love interest, regardless of how sweet and innocent they seem, have something they’re hiding. You’ll have to overcome that to be able to move forward. I think we have a story that really takes you through the full spectrum of emotions, and leaves an impact. I’ve also spent a considerable amount of time developing the steamier aspects of the game.

Do you have any other projects you’re working on that VN Game Den readers can look forward to?

We have a super secret large project planned, and a much smaller game jam idea that we’re planning to work on once In Blood wraps up. I can tell you the game jam will be something of a dark fairy tale (with my signature spooky kisses, of course). We’re hoping to have an artist join the team and have some great things in the works.