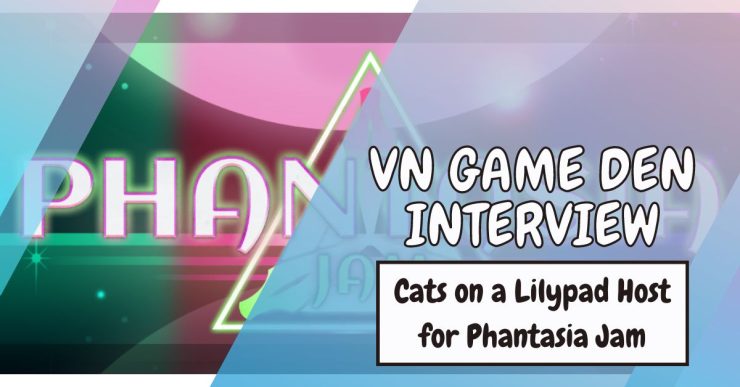 Behind the Scenes with C.L. for Phantasia Jam

We sat down with one of the creators of Phantasia Jam, C.L., to talk about the jam itself and her experiences with game jams.

Phantasia Jam is a new game jam that encourages teams to create a story-focused fantasy game. To learn more about the jam and what goes on behind the scenes when hosting one, we’ve decided to sit down with one of Phantasia Jam’s creators, C.L. also known as Cats on a Lilypad Studios, to learn more.

Tell our readers who you are and how you got into game development!

Hi! My name is Courtney, but I most commonly go by my initials C.L. I am a solo programmer and audio engineer and the developer / owner behind Cats on a Lilypad Studios.

Making games was something I always wanted to do, growing up on games like Dragon Age, Mass Effect, even the Sims, games have shaped me, and I knew I wanted to be a part of making more of the things I loved so much.

My turning point in my long journey came from joining a discord server for a newly in-development visual novel, those developers becoming my best friends (and co-hosts for Phantasia Jam, Two and a Half Studios, who will be busy with their new Kickstarter launching at the end of our first month), taught me the basics of programming in Ren’Py and along with my life partner encouraged me in making my own games, I’ve been working on games ever since.

You’re one of the creators of Phantasia Jam, which at the time of writing is going on. What inspired the creation of this jam?

We’re nearly a month into our first Phantasia which is exciting. Our inspiration came mostly from our love of fantasy games and a desire to see more! It’s all an elaborate trap to get more fantasy games.

I’m always looking for projects I can do with friends as well so hosting a jam was a fun little way to passively work together.

Both of our studios have fantasy as a core of our games. I have 2 in progress with fantasy themes, and Two and a Half have three released with a 4th launching on Kickstarter at the end of August.

Fantasy games are something very special to us and we love seeing the worlds and lore people can create!

What made you and Two and a Half Studios want to host a game jam in the first place?

Participating in jams means finding one that matches the game you want to make.

Many are restricted by romance type or only a month long, a time frame I’ve personally sworn off doing again.

We were talking about how fun it would be to run our own jam with our own theme and rules and there was no reason not to do it, so we started putting together Phantasia.

The funnest thing about our concept with it though is in the name.

One of the meanings of Phantasia is to have no set structure, another is imagination. This could mean we’ll stay with our fantasy theme or we might have sub themes, different main themes each year, who knows!

We’re looking forward to seeing what we can do with it.

When it comes to Phantasia Jam, it’s really relaxed compared to other jams out there. It has a three-month time frame and very little restrictions/rules. Why did you decide to take this approach?

Any one who’s done a jam knows how stressful they can be, so much so that it can put a real strain on the well-being of a team. Last year I did nearly every jam back to back with various teams, one thing I noticed is how often everything comes down to a final week scramble with a battle between life obligations, and jam requirements.

Fantasy as a genre also has such a potential to be deep, long stories and we wanted to give people a little extra time to really get creative with their games.

We also took into consideration what else was happening, as we overlap with other jams we wanted to give people more of an opportunity to not be locked out of Phantasia if they wanted to join other jams as well.

You’ve participated in a ton of game jams before. How has your experience participating in game jams helped you create Phantasia Jam? Were there any lessons that you learned and wanted to put forth in your own game jam?

The experiences of past jams we’ve participated in mostly shaped our rules and time frame. Going in we wanted to craft something more casual, more forgiving on rules and time.

We’ve already discovered a lot we could do differently in the setup that hasn’t translated between merely participating in a jam and actually hosting one, particularly with a first event.

Can you name us some struggles that you’ve personally endured with game jams that influenced your decision to be lax on the rules and restrictions?

In a broader sense our rules are inspired by our experience participating in shorter jams, as well as being our first jam.

It’s not uncommon for teams to be spending sleepless nights rushing at the final hour to achieve something unique but not having enough time to make the assets for something unique.

I think my record is 2 days of no sleep as the programmer  trying to make a jam deadline.
There’s a lot of jams with strict rules so we thought it would be interesting to do the opposite. Having too much freedom is its own struggle on a time limit.

What are some of the challenges that you’ve encountered when creating your own jam? What’s your advice to people who want to host their own game jam?

Personally I’ve found the biggest challenge to be community, reaching people with the jam, advertising our existence. We have a discord dedicated to the jam, and a twitter, so far most people have found us on their own though.

The other prominent challenge is time, there’s only so many months in a year and  all of them have current jams already in them. Which meant we had to figure out the best way to overlap our jam with currently existing ones.

Advice wise, I don’t know that we’ve got enough experience to know what we’ve done right yet, but I will say that information is proving a big thing for us.

Being our first year we don’t have the experiences of previous years to give us an idea of what people need from us specifically. I would advise to try and predict what people might ask you and put together a FAQ with as much information as possible without being overwhelming to the participants.

Also be willing to be available to answer questions, and interact with the participants, jams have an incredible community behind them with so many different devs coming together to have fun making games and sharing experiences.

What is your advice for those entering game jams in general or maybe Phantasia Jam?

Number 1 rule is to have fun. Time limits can be stressful, a lot of people get hesitant to join in case they can’t make those deadlines, but I don’t think they matter too much, use a jam as inspiration to start a project, to theme it, as the motivation and ability to get a team together. If you don’t make the timeline? Release it later! Don’t let yourself get so stressed that you no longer enjoy making something.

Be kind to yourself and know that anything you accomplish within such a short span of time is amazing whether you finish now or not.

Most games take years to finish and you’re making something in 1-3 months? That’s incredible!

Number 2 is scope, help that jam anxiety by controlling your scope. Plan out what you want to do and assess how much of it you can do, and set goals. You can always add things if you find yourself with spare time, but be realistic with your scope for the sake of all your team. Everything takes time, and everyone relies on each other for aspects of their own duties.

100% we’ll be back next year! We’re expecting to be back with the same months next year, we’re thinking about what we can do to add some extra challenges or sub themes to the jam as well!