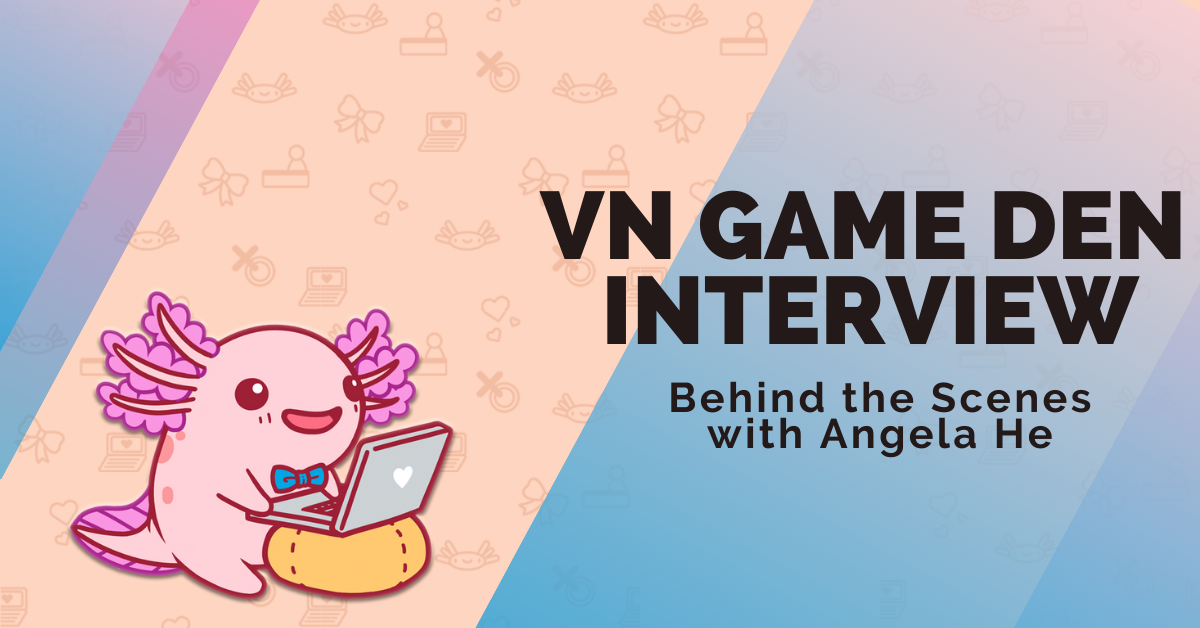 Behind the Scenes with Angela He

Angela He sat down with us to discuss why she started making visual novels, her newest project, and more!

Angela He is a visual novel developer who focuses on emotionally impactful stories with unique visuals and fluid animations. We’ve had the opportunity of playing through and reviewing quite a few of her games on the site including: a new life., missed messages., and YOU LEFT ME.

Angela He sat down with us to discuss why she started making visual novels, her newest project, and more!

How did you start making games and why did you choose visual novels as a medium?

I started making games in junior year of high school because I was taking this AP Capstone class and wanted to spread awareness about this issue I was researching (foreign aid) so I was like… huh… maybe I could make a game to spread awareness! So I made my first really bad game lol. It was a platformer. Later on I chose visual novel as my preferred genre because I just like playing visual novels better sometimes (unless they’re the really bad ones where there’s one flat protag with ten girls throwing themselves at him lol). Visual novels don’t require good hand-eye coordination most of the time, but good ones still present choices that require you to think. They’re a great genre!

What are some of your favorite visual novels? Have you drawn inspiration from any?

Ahh there are so many! There’s a lot of cute ones on itchio, I love npckc and nomnomnami, also Butterfly Soup is a classic, omg and I love the Danganronpa series. I have Stein’s Gate and Ace Attorney on my to-play list. Inspiration? God they’re all so beautiful? So definitely UI inspiration for sure… also playing so many VNs gives me inspiration for what I want to see but haven’t seen yet!

Your games deal with a lot of heavy topics. What is the motivation to create these kinds of stories?

My later games became inspired by things that happened to me in real life.

Do you see your games as a tool to help educate people about the topics you cover (domestic violence, mental illness, depression, etc)?

I used to, I was a huge advocate for educational games, but then as I grew up my thinking changed. I just want people to enjoy their experience with my games now, first and foremost. If they learn anything that’s great, but people have enough on their plates; I don’t want their first priority when playing my games to be more responsibility.

If there’s one thing you want people to take away from your games, what would it be?

I guess just have fun with it, I don’t have anything in particular I want you to take away. If you learn a lesson or something- great, else it’s whatever. Since these days I make games more for me than for other people.

What was the first visual novel you’ve ever developed?

He Beat Her, which I’m not proud of, but that was my first!

You have quite a few games released. Is there one you like more than the others?

I guess my favorite is missed messages.

Is there a game of yours that you think was easier/harder to work on than the rest? If so, which one and why?

I think missed messages was the hardest because it was my most ambitious Ludum Dare project and the only one that got to Steam. So I had to put a lot of work just in a few days. T_T Of course I spent the next few weeks polishing it so I didn’t do the whole thing in 3 days… 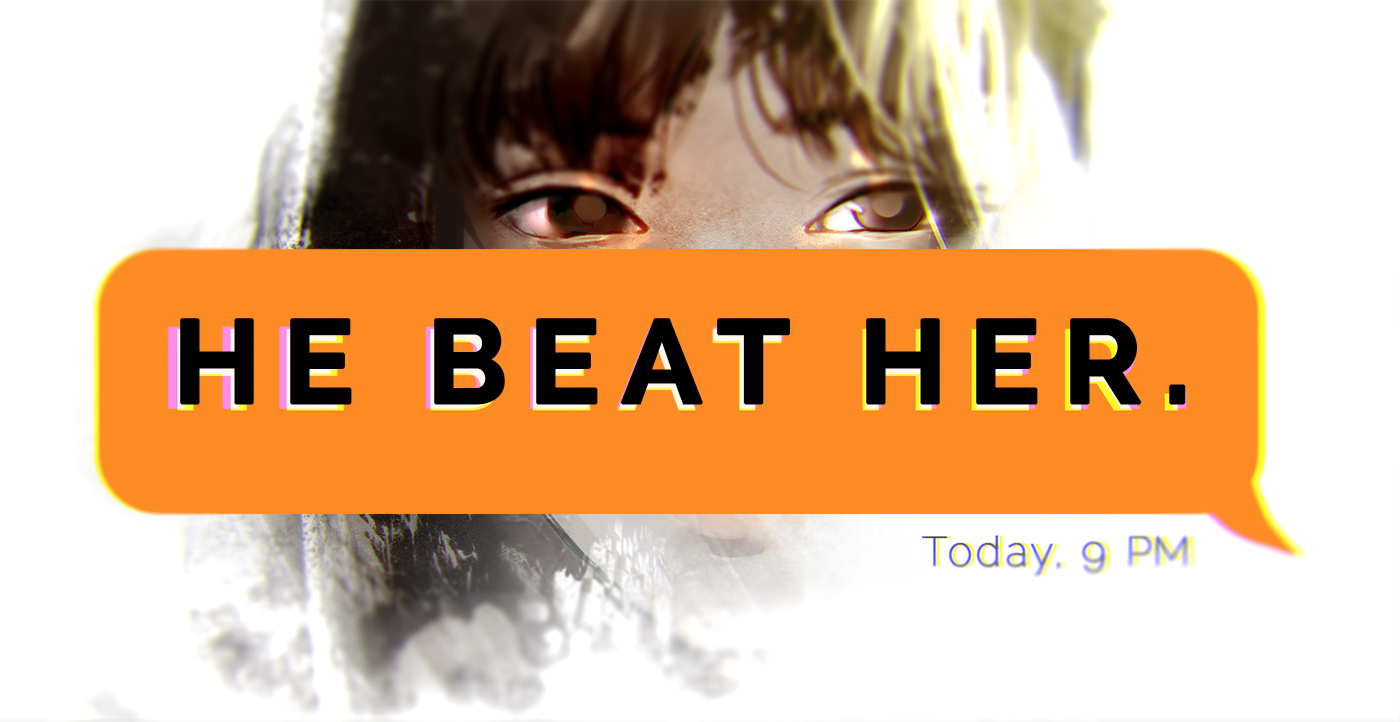 Your VNs are very unique in terms of style and animation. When people click on one of your games, they’re able to tell that it’s an “Angel He” production right away. How does it make you feel knowing your games are so recognizable to many? Further, what has inspired this style and have you built and improved upon it over the years?

I dunno I guess I have a specific art style? Also all my games that I’ve worked on alone are pretty sad but have a few funny moments, so the writing is somewhat distinct? What’s inspired my art, I guess just looking at art I like on Twitter and producing similar. For the writing, I read a lot and also I used to be pretty sad so I guess that’s why my writing is distinct in its particular way. I guess I’ve built upon it but I can’t say concretely how? I mean it’d be discouraging if I haven’t improved over the years.

Markiplier played not one, but two of your games! Considering visual novels aren’t the first choice for a lot of Let’s Players, what was it like seeing a content creator with a huge influence play your game?

Well to be honest I haven’t watched those videos because I’m pretty anxious of what he’s gonna say… It’s really cool that he’s played them though! It was really awesome and made me feel confident that maybe I could do game dev.

How has your growing popularity in the VN community impacted you? Are there any opportunities you’ve gotten because of your games that you’d like to share?

It hasn’t really impacted me. I mean sometimes my friends will be like “oh my friend mentioned one of your games and I said I know you!” or I’ll meet someone who knows of my games, which is like, I have no idea how to react so I’m just like “haha cool *sweats* let’s move on”. Otherwise it hasn’t impacted me. I don’t like to be messaged about my games or ponder over reviews about my games because it makes me anxious, even if they’re positive, so I tend to ignore discussion about my games – unless it’s about bugs, then I’ll fix ’em. I haven’t gotten any opportunities I don’t think.

Do you have any advice for people who are looking to develop their own visual novels?

I guess just go for it! It’s really hard but anyone with a computer and good wifi and a reasonable amount of free time can do it!

Are you currently working on anything? What projects can our readers look forward to in the future?

I’m working on this project called mirror rorrim. It’s a platformer/visual novel that I have all the worlds fleshed out, the trailer rendered; I’ve been working on it for a year and expect another year to wrap it up. Although I’m taking a break right now to release a webtoon soon so I might have to delay mirror rorrim further T__T

a new life. Angela He behind the scenes interview missed messages. YOU LEFT ME.