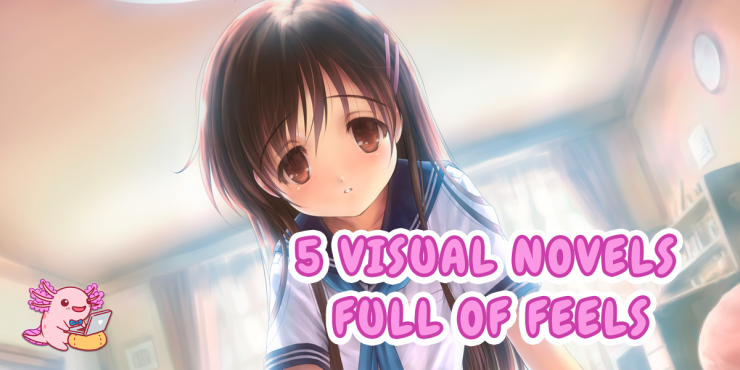 These are 5 visual novels that leave an emotional impact and convey powerful messages about life.

Visual novels take us on a journey, and sometimes that journey is a rollercoaster of intense emotions. When we watch movies, we do so to feel a certain emotion, whether we want to feel scared, to laugh, or to feel good. The same applies to visual novels; we read them to feel an experience and uncover a story about the characters within the novel. Visual novels can be a great medium to illustrate heavier topics or simply tell a sentimental story. Below is a list of five visual novels that tug on the heartstrings and also leave the reader with a feeling or message about life.

missed messages. by Angela He

missed messages. is a romance/horror game about a girl and her roommate. This game is very short, approximately 15-30 minutes in length for each playthrough, but the story leaves an impact and brings awareness to life’s pressures.

Without spoiling it, this story itself conveys a very powerful message to players and is very thought-provoking. It covers some very heavy topics, so I recommend proceeding with caution if you are sensitive to triggers revolving around death. Luckily, the game has a trigger warning message pop up upon starting.

I have to say, I wasn’t expecting to feel any kind of intense emotion for characters when I only had about fifteen minutes with them, but missed messages. managed to surprise me and bring me to tears.

Growing up is without a doubt an emotional experience for all of us, and Our Life: Beginnings and Always is a visual novel that captures just that. This is a game where you transition from childhood to adulthood alongside a boy named Cove. It features a customizable character with feelings and a personality that are shaped by the player. GB Patch Games describes this game as a “feel-good” simulation, as players experience a wide range of emotions throughout this game.

I have not finished this game yet, but it seems to be very well-received by the community. They aimed high with a concept like this, and with a whopping 397,000 words and thousands of stellar reviews on Steam and itch.io, they’ve hit the mark with this game.

Developer ebi-hime never fails to deliver when it comes to heartfelt, emotional stories. Mireille Maiorano’s life takes a turn when faced with the unexpected death of her father, and she must relocate to her uncle’s home in France. Lyon, a longtime employee of her family, is tasked with escorting her to her new residence.

The story is kinetic until the completion of the first playthrough. Following the initial playthrough, players are then rewarded with an alternate ending to the story.

Empty Horizons will leave you feeling bittersweet, but if you can withstand the heartache, it’s worth it—the story is beautifully told. To say that this visual novel took me on an emotional rollercoaster would be an understatement.

Narcissu 1st & 2nd is a visual novel collection created by a Japanese developer by the name of stage-nana. This is a set of two stories, both of which illustrate young characters’ lives and their battles with life-threatening illnesses. It explores the hardship of disease and its effects on the life of a young person—someone who is supposed to have their whole life ahead of them. The stories are entirely kinetic, without any choices, and are visually unique. The formatting is cropped and few sprites are shown other than CGs, but the message the developer sends about life and death is conveyed very well.

Another great thing about Narcissu 1st & 2nd is that it’s completely free. (If you’d like to financially support it, you can also buy the stories as part of Narcissu 10th Anniversary Anthology Project.) Upon starting the game, you will be asked to choose which translation you would like to read the novel in. I recommend choosing “gp32 – insani” as this version seems to be the most natural.

What I loved about this visual novel is that it left me with a strong and powerful message: appreciate the little things. After reading both stories, I had an overwhelming sense of gratitude for the simple pleasures in life, and I still do to this day.

Clannad shines when it comes to delivering a wide range of “feels.” Developed by Key, this game takes you on an emotional journey. The main character, Tomoya Okazaki, lives a relatively unsatisfying existence. Enter Nagisa, a girl with a love for life and all things drama club. As more characters join Tomoya in his adventures, his life becomes more meaningful. You’ll fall in love with these characters very early on and grow with them as the story progresses.

This story is sewn with bits of comedic relief, sadness, and joy. It’s a story of love, friendship, and family, and explores the meaning of life. It’s another piece that taught me to appreciate the simple things in life.

Clannad holds a very special place in my heart; I highly recommend this title if you want to laugh, cry, and feel a wave of emotions.