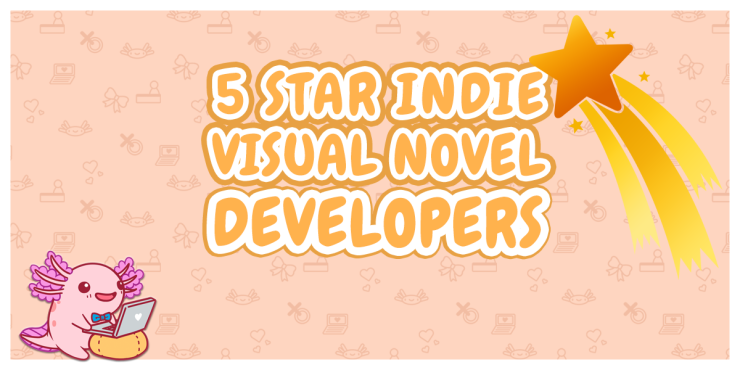 These are five visual novel developers that stand out.

These are five indie visual novel developers that have left their mark in the world of visual novels.

STARDUST★SODA has been in the visual novel industry for a while now, creating titles such as Reflections on the River, so obscure;, and Through the Panels. The development team is comprised mainly of the duo SWEET★STRAWBERRY and PEROXIDE★PRINCE, with additional team members contributing to their various projects. This developer has managed to create an exceptional and distinct aesthetic for each of their games, and I think that’s an impressive feat. Cooked with Love is a shining example of how this developing duo are masters of aesthetic. The composition of each scene is really engaging, and there’s constant motion of the characters and the textbox so your eyes never stray from the screen.

The cooking minigame in Cooked with Love was hilarious as I watched the characters talk about eating the ramen chunk slop that I created. Aside from containing engaging designs, their games are really entertaining. STARDUST★SODA’s games can be found here.

Matthew Vimislik, also known as Vimi, is a visual novel developer known for titles such as Romancing Flesh, King of the Cul-De-Sac, and more. Vimi is a professional animator and illustrator, and you can see his experience within his visual novel projects. The comic book art style and animations in King of the Cul-De-Sac are so eye-catching in appearance that it looks like a cartoon you’d see on TV. Romancing Flesh is another title where it is clear a lot of work went into the game’s aesthetic, with its exceptional animation and distinct design. The animation gives Vimi’s games a level of immersion that makes them pop. Vimi also really gives back to the visual novel community and creates “How To” videos for those looking to sharpen their skills in Ren’Py.

If you’re a visual novel developer, I highly recommend subscribing to Vimi’s YouTube channel. Vimi posts new videos just about every week, and they are very helpful for Ren’Py users both old and new. You can find Vimi’s games here.

Velvet Cupcake Games is currently working on Made Marion, which is a unique and highly ambitious visual novel project. What I absolutely love about Made Marion is how it manages to blend all of my favorite aspects of a game into one. The game is a medieval fantasy; there’s a diverse cast with multiple characters of color; there’s an array of love interests including men, one very interesting woman, and one nonbinary character; and the Robin Hood-inspired story is undoubtedly compelling. What more could you ask for? Every single character leaves me on the edge of my seat, eager to uncover more about them. This game has so much to offer, and it’s clear that Velvet Cupcake Games aims high when it comes to creating a visual novel.

Velvet Cupcake Games had a successful Kickstarter campaign in 2021 that provided the funding for Made Marion. I cannot wait to see how this project turns out, and I will be keen to see what else this studio produces in the future. Everything you need to know about Velvet Cupcake Games can be found here.

The Magical Otoge visual novels are Batensan’s gift to us otome fans. The worldbuilding and art style across all of the stories are magnificent. I think the Magical Otoge series is the perfect set of games to reel in first-time otome game players, but whether you’re a veteran otome game player or a newcomer, I think these visual novels are for anyone and everyone. Should anyone ever ask me for recommendations on otome games, I will suggest Magical Otoge every time. The artwork, music, and story are woven together to create a masterpiece. The best part about these stories is how the character relationships develop healthily between the love interest and the protagonist.

If I could describe Batensan’s work in one word, that word would be “wholesome.” Batensan’s visual novels are one-of-a-kind, and they’re everything I need to feel warm and fuzzy inside. If you haven’t played any of the Magical Otoge games yet, then get ready for an adventure. A complete list of their games can be found here.

Visual novel developer GB Patch Games was formed in 2014 and is most renowned for their release of Our Life: Beginnings & Always. It is a game that has completely enraptured fans with its heartwarming story about growing up alongside your neighbor Cove. What’s wonderful about this developer is that they took a chance at spinning a completely unique story and creating a visual novel that is an entirely new experience. I think a developer could easily have scrapped the idea, because a story of this scope might seem daunting to see through to completion, but GB Patch Games was bold and innovative, and that’s what makes them exceptional.

Another great thing about this developer is their work ethic. GB Patch is very active on socials and has been remarkably productive in producing Our Life DLCs, generously feeding fans’ hunger for the story, including the latest release of the Cove wedding DLC. The developer has even more DLCs expected to release this year. You can find a complete list of their games here.