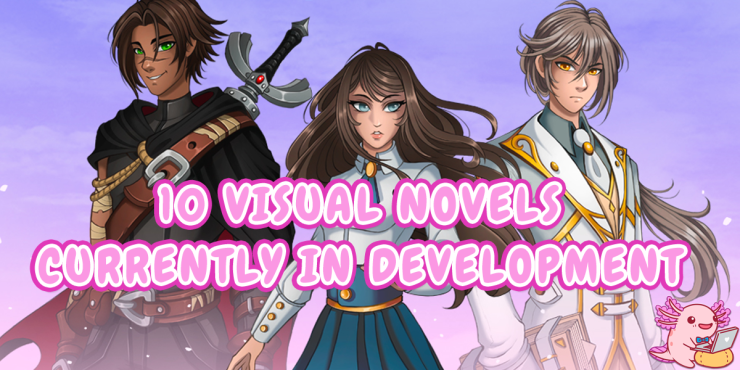 Here are 10 visual novels currently in development that you should keep an eye out for.

I’ve come across a lot of visual novels that are in progress that I think more people should know about. This article features a variety of games: dating sims, a few games based on webcomics, fantasy-themed visual novels, and more! See below for the complete list of ten visual novels to keep on your radar.

My Path is an otome game that illustrates a world in crisis; a young researcher must navigate adversity and help people in need. This game was inspired by current real-life events and is set to release on itch.io.

Currently there is no demo or official game page for My Path, but you can follow the developer on Twitter.

Heart & Soul is an otome visual novel that explores ancient Greece and Greek mythology. You play as the Greek goddess Psyche, who is forced into an arranged marriage with a notoriously monstrous husband—or so she thinks. Psyche discovers that her husband isn’t the monster she thought he would be.

You can play the demo and wishlist this game on Steam!

Mark Delaware is a freshly turned vampire who must hide his secret in this upcoming visual novel, Twice Reborn. The protagonist must decide whether to embrace his new identity or find a way to become human again. Which will he choose?

Story-rich and riddled with choices, you can expect different routes and endings based on Mark’s choices. Check out the demo on itch.io and Steam!

Play Dead! is a kinetic visual novel about a band, a mysterious abandoned house, and a lively but dead ghost dog. A paranormal horror fused with comedy, Play Dead! was originally created for Spooktober 2021.

This series is released in small chapters, with more on the way! You can read the first three chapters on itch.io now.

You can also check out VN Game Den’s review of chapters 1 and 2.

6. Under Pretense of Death by Pink Chinchilla Games

Under Pretense of Death is a fantasy otome game set in a world of magic and technology. This story features a female protagonist, Solis, who is a half-blood elf on a quest to fulfill the wish of her dead friend. A series of mysterious events unfolds upon her arrival to the Fairy Kingdom.

You can expect romance, choices, hidden object gameplay, and mini-games from this upcoming visual novel. You can find the demo for this game on itch.io, linked above.

5. Meanwhile in Riva by Tymedust Games

Meanwhile in Riva is a paranormal mystery game that offers an intricate choice system and player stats. Strange things are occurring in Riva City. Each choice heavily affects the outcome of the story.

The game features a lo-fi hip-hop soundtrack meshed with a story that revolves around paranormal horror, romance, and comedy. You can try out the demo for Meanwhile in Riva on itch.io.

Play an otome game inside an otome game as the heroine navigates romance both in-game and in real life. The demo is currently available on itch.io.

A spin on the magical girl genre, you play as an average high schooler who meets a cast of girls with more to them than meets the eye. At night, these girls are superheroes that fight off the monsters that endanger the town.

Winning Love by Daylight is based on a webcomic. You can play the first two chapters of the visual novel on Steam and itch.io or try out the demo for free.

Pipe Dream is a dating simulator that follows Robin, a college student looking to escape her past and start fresh. There are six romanceable characters, but some of them may not be the best choice for Robin.

If you’re looking for a dating sim that tells the story beyond the getting-together, then Pipe Dream is for you. The demo is currently available on Steam and itch.io.

1. A Cottage Story by LadyMeowsith

A Cottage Story is a visual novel with a storybook-like aesthetic. Play as an apothecary residing in the magical Rossenward forest, home to an array of mythical creatures whom you offer your services to. Your life is turned upside down when a client arrives with an urgent request.

You can choose your pronouns, name, and appearance in this visual novel.

A Cottage Story is a solo project. You can read our review of the demo here.